Winning trillions of dollars for low-carbon, climate-resilient infrastructure requires better understanding of its benefits and risks 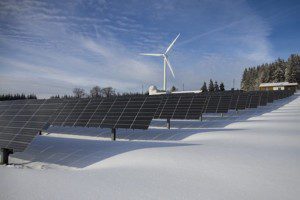 Build a road to a shopping mall, or more energy-efficient social housing? Convincing investors to bankroll construction and services that do not heat up the climate or succumb to disasters, while boosting jobs and quality of life, is a tough task, international organisations said this week.

Gathered to discuss the challenge in Barcelona, officials from development banks, businesses and governments agreed to work together to push the need for low-carbon, resilient infrastructure up the political agenda.

They also said they would explore the development of common standards to help markets pour trillions of dollars into it.

Luigi Carafa, executive director of the Climate Infrastructure Partnership, which hosted the conference, said large investors, such as pension funds and insurance companies, do not know which transport, electricity, water or telecommunications projects tick the right green boxes.

“We really need to define what … are sustainable infrastructure assets, because we need to reduce the uncertainties for institutional investors,” he told the Thomson Reuters Foundation after the event.

Tools that measure the environmental, social and economic impacts of projects are emerging, ranging from an online platform run by the Mexican government and the Inter-American Development Bank to a carbon savings registry for cities.

But their use remains fragmented, making it hard to compare projects and decide where to allocate money, forum participants said.

Stephen Hammer, global partnerships advisor with the World Bank’s climate change group, said some of the rating systems had weaker standards than the bank’s own safeguards, meaning the bank could not back projects they green-lighted.

Analysing infrastructure proposals can take time and money, especially in places where data is scarce, such as in many poor nations, he added.

“If that cost goes up, then it may be yet another factor scaring off private capital from showing up in some countries where we all agree it needs to,” Hammer said.

With the right policies, developing countries could provide water, sanitation and electricity for all, expand transport, improve food security and flood protection, and move towards decarbonising their economies – all while limiting annual spending on new infrastructure to 4.5 percent of their gross domestic product up to 2030, a new report from the World Bank Group says.

Morocco’s state-owned clean-energy company, Masen, has attracted investment into huge solar power plants in the North African country so successfully it is mulling raising its target for renewable energy to 70 percent of its electricity mix by 2030.

Ali Zerouali, Masen’s head of cooperation and international business development, said the state had cut risk for commercial energy developers through a range of techniques.

They include acquiring land, providing roads, water and other services, and buying the power the plants generate.

Any project backed by Masen, Zerouali added, is supposed to bring benefits to communities living nearby in the form of jobs, roads, water supplies and grid connections.

“We are trying to advocate a more holistic approach in order to share the benefits of this new trend,” he said. “It’s not really a matter of lowering carbon emissions; it’s mainly a new lever for our economic growth.”

Otherwise, cities will end up with infrastructure projects chosen by private backers, who are not in a good position to decide what is needed, she warned.

“You want the right people around the table for specific projects, who are deciding together what each other are going to need for that project to go forward,” he said.

ARCHIVE PHOTO: A thermosolar power plant is pictured at Noor III near the city of Ouarzazate, Morocco, November 4, 2016. REUTERS/Youssef Boudlal

Finance specialists pointed to the massive amounts of money sitting in sovereign wealth funds – estimated to top $15 trillion by 2020 – and also in foundation pots, largely invested in equities and bonds.

MFF, for example, funded research that helped shape the recently-adopted Indianapolis sustainability plan. The U.S. city has now been selected as one of 25 to receive resources from Bloomberg Philanthropies to tackle climate change faster.

Argentina, meanwhile, runs a programme to de-risk the construction of renewable power plants, including solar and wind, and has attracted investment of nearly $7 billion in two years, with 126 projects now operating or under construction.

A state-run trust fund, the government and the World Bank offer commercial companies a series of guarantees that provide financial security for deals, while a national goal of reaching 20 percent clean electricity by 2025 offers policy certainty.

Argentina is now thinking about how it can help other emerging economies deploy a similar model, said Maximiliano Morrone, national director of renewable energy promotion.

Carafa said a key aim of the fledgling sustainable infrastructure group would be to encourage sharing of successful approaches among countries with similarities, such as Costa Rica and Norway, which both have a heavy focus on electric vehicles.

Masen, for example, is providing technical expertise to develop solar, wind and hydropower projects in a dozen countries in Africa, where 600 million people live without electricity.

Among developing nations, countries that have proven models for mobilising investment are still the exception, said Carafa. “We need to do something about it,” he added.

With $90 trillion set to be spent by 2030, making sure new infrastructure is built with clean power, runs on it and can withstand worsening climate disasters is key