In Zimbabwe (like many other countries in arid areas with seasonal rainfall) we are facing the many symptoms and signs of our country’s advancing desertification: ever-increasing droughts, floods, wildfires, poverty, poaching, social breakdown, violence, mass emigration to cities, biodiversity loss and climate change. No economy can survive if we destroy our soil – the only economy that can ultimately sustain any community, or nation, is based on the photosynthetic process — green plants growing on regenerating soil.

So, if we wanted to find out the optimum way to manage our wildlife, people and economy, logically, shouldn’t we be looking at our National Parks for the best examples of what we can do for our environment? Because in national parks, we not only have the best management the world knows, we don’t have any of the issues that are normally blamed for causing desertification: ignorance, greed, corruption, corporations, livestock, coal, oil, etc. Let’s do that now…the following are all photos taken in our national parks (the first 3 were taken in May right after the rainy season when they should still be looking their best!)

As you can see from those photos, some of the worst biodiversity loss and land degradation we have in Zimbabwe is occurring IN our National Parks. But, as I pointed out, those have been run using the best management known to us and have been protected and conserved for decades. We’ve clearly been missing something… 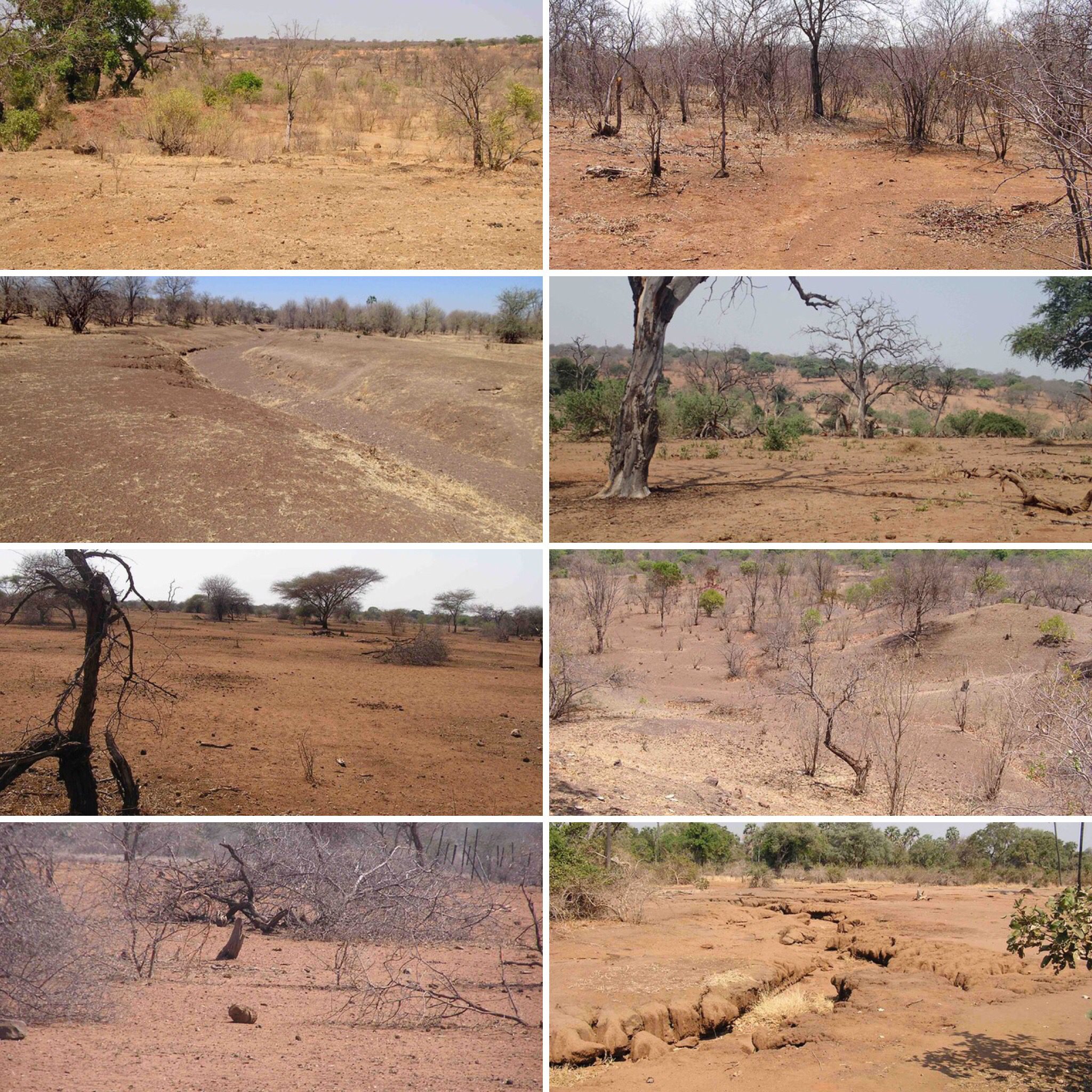 The above 8 pictures are a mixture of National Parks and Communal Land…can you tell which is which?

We are seeing this land degradation both inside and out of our Parks because there is an over-arching and common cause of desertification that nobody has understood, or been able to successfully address, until recently.

We spend our lives blaming resources for causing the damage (coal, oil, livestock, elephants, etc) but resources are natural, so how could they possibly be to blame? Only our management of them can be causing the problem.

ALL tool using animals (including humans) automatically use a genetically embedded management framework…and every single management decision made is in order to meet an objective, a need, or to address a problem. And those decisions are made with exactly the same framework, or thought process and for exactly the same reasons, whether it is an animal or a human.

For example, a hungry otter has an objective: he wants to break open a clamshell because he needs to eat. He uses a simple tool (technology, in the form of a stone) to do so. He does this based on past experience or what he learned from his mother.

Or, the president of the United States has an objective: to put a man on the moon within a decade. He and his team use the same tool (technology, but various and more sophisticated forms of it) and base their choices on past experience, research, expert advice, and so on. It’s the same process, or framework, in both cases, only the degree of sophistication has varied.

To this day, this decision making process works just fine for the otter. But imagine that one day, the otter invents a machine that can crack open 1,000 clam shells a day and that all the other otters suddenly stop doing what otters are designed to do and just come to him to get their clams. They still use the decision making process but everything else has changed…that tiny advance in technology would have inadvertently set off a complex chain reaction through the whole ecosystem and there would soon be catastrophic environmental knock-on effects because the balance of the ecosystem has been upset. The ecosystem will keep trying to adjust to this change but eventually it will start to collapse. Imagine the otter started charging for the clams. Now, with every decision the otters make, in order to make sure their ecosystem didn’t collapse, they would need to be simultaneously addressing the social, environmental and economic aspects of their actions. Their management would have to evolve with the change.

This is exactly what happened to humans…As soon as our technology advanced, our management should have evolved to accommodate for it. But it didn’t.

Our natural world is rapidly collapsing all around us and we have ended up constantly chasing our tails and dealing with the symptoms and complications we’ve created. While there have been thousands of books written over the years on different types of management, if you dig a little deeper and ‘peel the onion’ the same genetically embedded framework is still inadvertently being used.

In the last 400 years, our technology has advanced faster than in all of the two hundred thousand or so years of modern human existence. Over those same few centuries, you can now see why the health of our planet has entered a breathtaking decline.  We now have the knowledge to change that…

No matter what we are managing, we cannot ever escape an inevitable web of social, economic and environmental complexity, so, in order to truly address any issue, the people and the finances have to be addressed simultaneously, not just the land itself. Isolating one particular part of the problem, or singling out a species and trying to manage it successfully, is no different from trying to isolate and manage the hydrogen in water.

With this knowledge, the Holistic Management Framework was developed. And, incredibly, it all started here in Zimbabwe, by my father, Allan Savory, an independent Zimbabwean scientist. This new decision making process ensures that no matter what we are managing, we focus on the root cause of any problem. It also makes sure that all our decisions are socially or culturally sound, economically viable and ecologically regenerative by using 7 simple filtering checks. And, it introduces us to a new, biological tool: animal impact and movement, that can be used to help us reverse desertification and regenerate our land and rivers.

This framework has received world-wide acclaim and is now being mirrored in forty three Holistic Management hubs on six continents, including the first university-led hub in the USA.

Now we can begin to understand that most of the problems we are facing in Zimbabwe today are simply symptoms of reductionist management.

Imagine that one day, someone starts to beat you really hard over the head, once a day, every day, with a cricket bat. It really hurts, and instead of trying to take the bat away from them, you just take a dispirin to deal with the headache it’s caused and carry on.

After a week, the pain will be getting much worse and the dispirin will no longer be strong enough, so you’d need a new painkiller. The stopain comes out. After a while, stopain won’t be enough, so you turn to Brufen. And so it goes on. Yet the blows continue.

Eventually, your organs will be struggling from all the medication and you’ll end up in hospital with very serious complications. The best doctors and specialists in the world are called in at great expense and they rush around treating all your worsening, and now life-threatening, symptoms. None of them can understand why you aren’t getting better – they’ve used the best medicines and procedures known. It’s because everyone is so focused on your symptoms, that nobody has looked up and seen the person standing behind you with the cricket bat.

It sounds silly when I put it like that, doesn’t it? But that is exactly what we are doing. 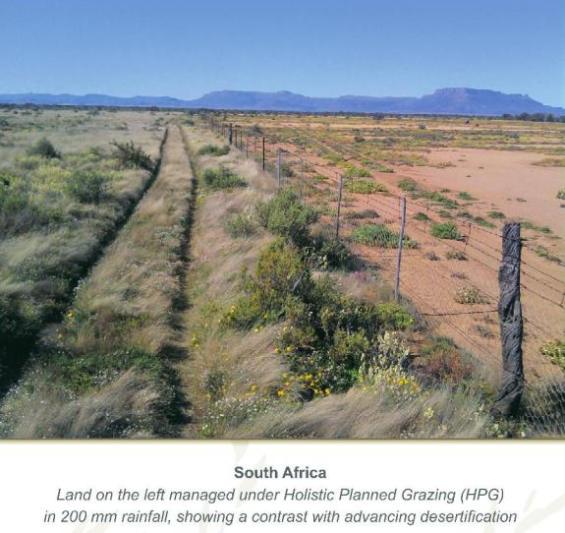 Our planet is in that hospital with life threatening complications, with Governments, Organisations and individuals doing their best, spending millions of dollars, often using expert advice, to find out how to treat the patient, but nobody has realised that they are only treating symptoms. Nobody has noticed the guy standing there with the bat.

The holistic management framework stops the blows to the head. As soon as we do that and the cause is being treated, all the symptoms will automatically begin to heal and fall away.

I am going to show you a screen shot taken from a short video clip we took with a film crew last month, of 4 different areas, all near to each other: you will clearly see the terrible desertification in both National Parks and nearby Communal Land. In comparison, you will see a vast difference on Dibangombe, the Africa Centre For Holistic Management (our learning centre, which is only 30km from Victoria Falls.) This habitat is being regenerated for all life by simply managing holistically. Every year on this land, despite the worsening droughts, the biodiversity increases and the land and wildlife flourish.

All this footage was taken in the same area, at the same time, with the same climate, the same soils, the same wildlife and the same humans.

These pictures were taken on the same day on land only 30km apart in February 2018, The 2 photos on the left are Zambezi National Park and the photo on the right is Africa Centre for Holistic Management (Dibangombe)

The great news is that we can turn it all around and we don’t have the thousands of different problems we all think we do. We only have to adjust one thing. Our management.

It’s time for us to evolve from using our outdated, reductionist management framework. We need to adapt to a new way of thinking and  apply this paradigm-shifting decision  making framework so that we can all work together towards regenerating our Zimbabwe.

Culturally. Socially. Economically. Environmentally. For for our people and for our wildlife.

Let’s start by stopping the blows to the head! 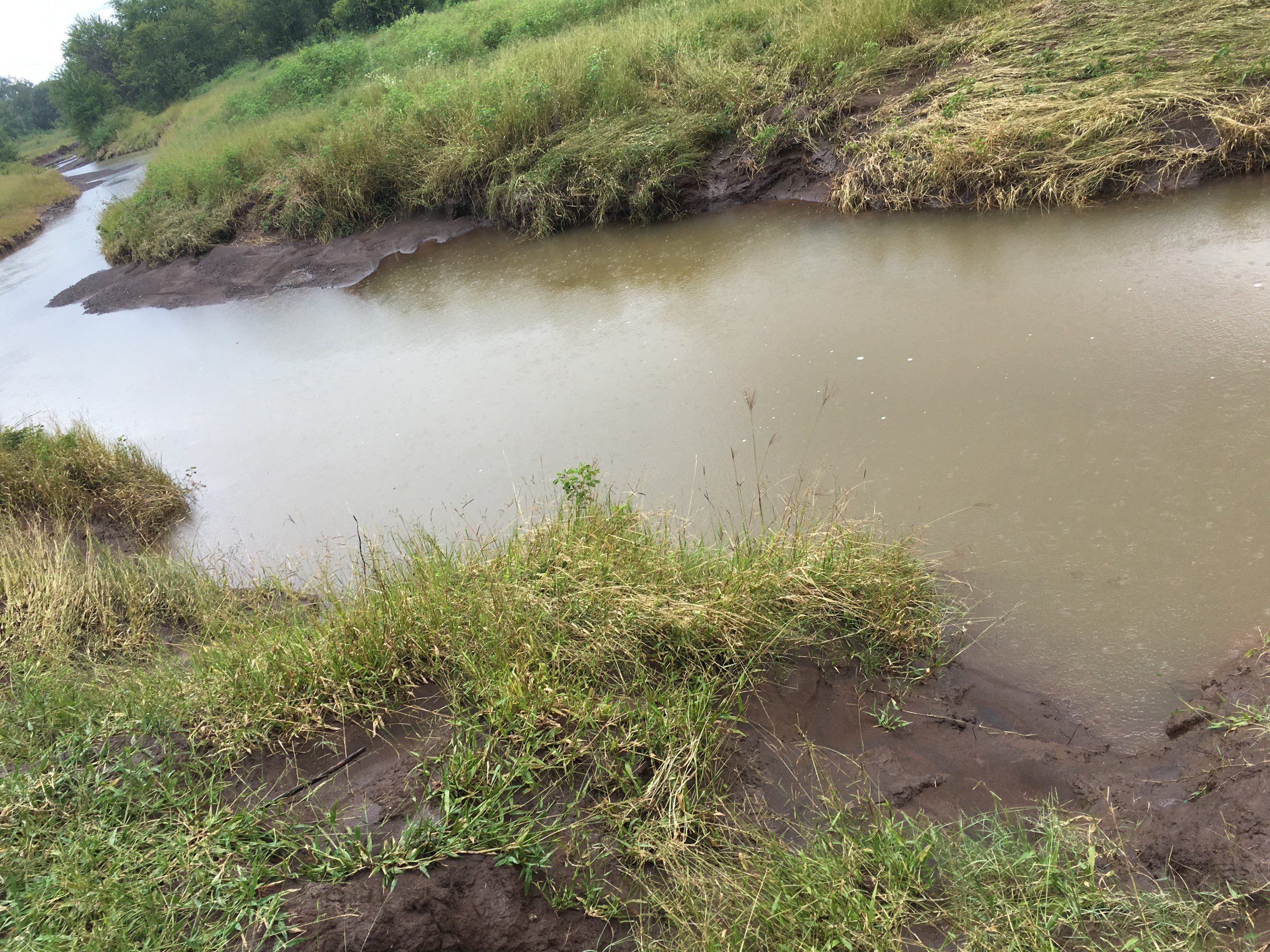 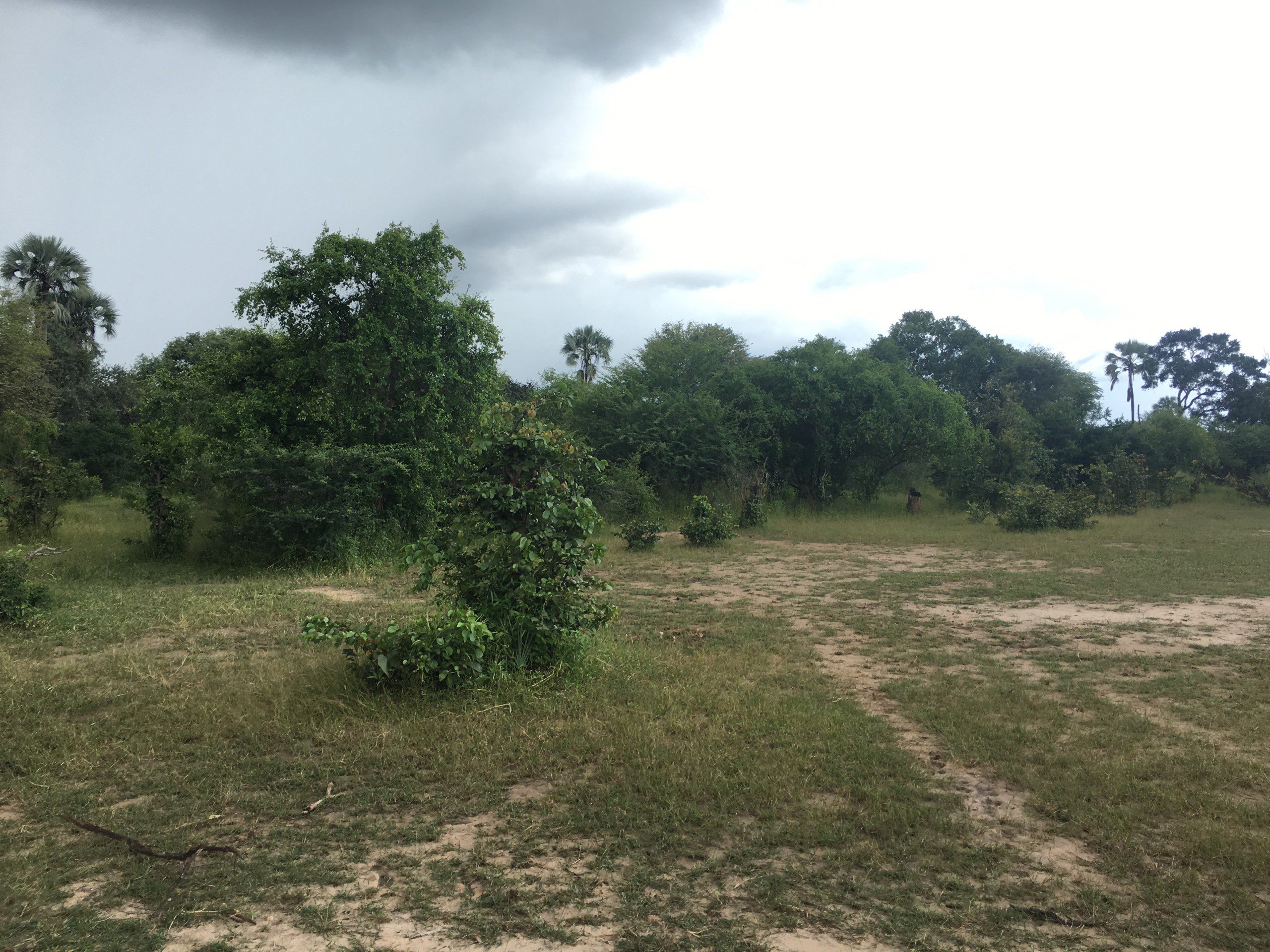