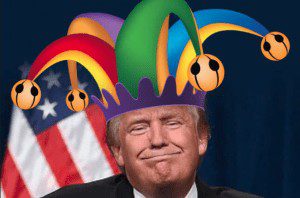 I’m getting more than a little tired of how the media characterizes and then analyzes what Donald Trump says and tweets.  Often they state that Trump “believes’ or Trumps “thinks” when there is little or no evidence of either, only of what Donald Trump “says.”

Thinking is a creative process generating ideas that lead to decisions.  Oh, sure, Trump makes decisions  but his thinking most often occurs in the demented minds of Stephen Miller, Rush Limbaugh or Fox News’ Hannity, not within Trump’s cranium. No Trump does not think, he’d rather be spoon fed his ideas. Who can really know what Trump thinks?  Only Trump knows what goes on in his head. For the nation’s most prodigious political liar, there can be no correlation between what he says and what he thinks.

So too, for the idea that Trump believes what he says.  Is there anyone that thinks that Trump does not know when he is lying?  Take for example Russia.  While Trump denies their involvement in election meddling, his meetings with Putin are secret, no records or translations are kept.  His business dealings and financial ties with Russia are likewise kept secret as are any connections to his finances, taxes and businesses that may shed light on the a relationship that would reveal the depth and  extent of his knowledge. Lacking hard proof of his true knowledge, is it more fair to say “Trump believes” or “Trump knows?” In reality we can only say with certainty that “Trump says.”

That his pronouncements are somehow tied to his beliefs or his thinking or even his knowledge is foolish, since he says one thing to his staff, another to Congress, another to the media, and another to his base at rallies, often contradicting recorded statements he has previously made, spinning and doubling back, while trying to parse words to “clarify” the lies he has been caught in or amend his omissions.

In short, there is nothing about Trump’s mental process or verbal arguments that may be relied on. Whether thinking, believing or knowing, we can only be sure that when he opens his mouth he is lying.