While the  pre-existing corporate world is trying to maintain their stranglehold on public and private systems, services and the policies that maintain them, we are currently witnessing the most important and profound disruption in the energy sector in over a century.

This disruption will have a major impact on the ways we live our lives, bringing us a healthier co-existence for both the people and the planet.

But bringing this about is going to take much more than good ideas. It will take action.

At a time when people are dealing with the impact of Covid-19, they are also dealing with another public illness: Information overload.  Unfortunately, much of this information is corrupted and influenced by radical forces and special interest groups.  It is very important that people everywhere are given unlimited access to the wisdom they need for ultimate health and well-being.

With increased demand for evidence-based wisdom, people everywhere are taking action to make a difference in the ways we live our lives.

Making it possible to make better and ethical decisions for ultimate health and well-being.

According to a report by evolutionary think tank, Rethink X:

We are witnessing the start of the most profound disruption of the energy sector in over a century. Like others throughout history, this disruption is the result of a convergence of several key technologies – namely, solar photovoltaics, onshore wind power, and lithium-ion batteries (SWB). A 100% SWB energy system is possible as soon as 2030 in regions that choose to lead, and because energy accounts for over half of all greenhouse gas emissions, the clean disruption of this sector will be a large part of how we can reduce emissions by 90% by 2035.

A common question that arises in response to our work is: how can solar and wind power meet all of humanity’s energy generation needs more cheaply than any other technologies?

The answer to this question, and the key to understanding energy decarbonization, is a phenomenon that we identified in our 2020 energy report using a tool that we call The Clean Energy U-Curve.

What if by working together, harness the wisdom to bring us together, enable a healthier co-existence, and bring about the systems and services for ultimate public health?

This will require a radical shift in the way we see life in our world and the ways energy is acquired and delivered.

Mobilized is bringing together media makers and earth shakers, systems designers and producers, campaigners and executives whose new business models create the potential for ultimate health.

Committed to a more holistic approach to health and well-being, we are transforming a ‘traditional’ conference and exposition into an ongoing interactive media experience that provides citizens everywhere with a front row seat to the changes we wish to create in the world.

Once the live experiences are over, citizens are invited to share the knowledge with others and join in the communities of conscious creation on an epic scale in the GLOBAL BRAIN. 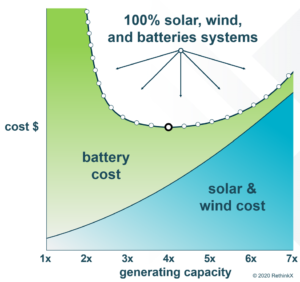 The Clean Energy U-Curve shows that there is a tradeoff relationship between energy generation and energy storage. We can either build more solar panels and wind turbines so that we can generate enough power even during the short days of winter, or we can build bigger batteries to charge up ahead of time.

Our modeling shows that there are thousands of different combinations of SWB that could physically do the job of providing 100% of all current electricity demand. But, very importantly, they are not all the same cost – some of them are much more expensive than others.

The Clean Energy U-Curve explains why this is the case, by showing that there is an optimal combination of SWB – a “sweet spot” at the bottom of the curve – where the total capital cost of the system is lowest. The exact sweet spot SWB combination is different for each region because it varies with climate, geography, infrastructure, and other factors. But what is most counterintuitive about the Clean Energy U-Curve is that for all the regions and countries we have analyzed, the sweet spot has always been between 3 and 5 times more total generating capacity than the existing grid.

So, how can it be cheaper to build 3 to 5 times more solar and wind generating capacity than we currently have installed with today’s coal, gas, nuclear, and hydro power plants? The answer is that when we have that much generating capacity, the system only needs 35 to 90 hours’ worth of batteries: and it’s the batteries that are so expensive.

The tradeoff relationship between energy generation and energy storage is not linear, and so it is neither obvious nor intuitive. For these reasons, the significance of the relationship is still not widely known or appreciated even within the energy sector itself. As a result, most conventional forecasts have never even considered building that much solar and wind capacity, which means they also assume an SWB system will require weeks’ worth of energy storage (sometimes referred to as ‘seasonal’ storage). Because of this, even widely cited conventional analyses assume mixes of SWB that are nowhere near the sweet spot at the bottom of the Clean Energy U-Curve. That’s why they come to the false conclusion that SWB systems will be extremely expensive.

Thankfully, this widespread and long-standing misconception is now starting to change as more people have come to understand our work, and as other scientists and analysts have begun to replicate our findings in their own research.

There are two reasons why the Clean Energy U-Curve is the key to understanding energy decarbonization.

First, it shows why SWB offers us the most affordable decarbonized energy system. By 2030, with an optimized mix of these three technologies, the cost of 24/7/365 electricity from 100% SWB systems will be much lower than from any conventional power plant option in every populated region. In sunnier regions like California, India, or Brazil the cost could be as little as a fifth of the cheapest fossil-fueled system, which is cheaper than the operating costs alone of existing coal, gas, and nuclear power plants. Because SWB will be so cheap, the stranding of conventional energy assets is inevitable due to economic forces alone, and that means decarbonization is also inevitable. With the competitive tide turning in favor of SWB, the immense power of markets is now working for decarbonization instead of against it. The exponential growth of SWB we are seeing worldwide as the disruption takes off is a clear sign that this inescapable economic logic is taking hold in the energy sector, just as has happened in other disruptions throughout history.

The second reason is that the Clean Energy U-Curve shows us how SWB can decarbonize not just today’s electricity system but virtually all other energy use throughout the global economy as well. This is possible because, as mentioned earlier, a 100% SWB system optimized using the Clean Energy U-Curve will have 3 to 5 times as much generating capacity as today’s grid. By designing the system to get through the worst weeks of winter, it will naturally produce an enormous surplus of electricity throughout the rest of the year – double or even triple the amount of power our grid currently generates. This is enough to electrify transportation, heating, and other forms of energy use. And, crucially, all of that surplus electricity will be virtually free because solar panels generate power at near-zero marginal cost. We call this huge surplus of clean, nearly-free energy Super Power, and it is going to change everything – not just in the energy sector, but across every value chain energy touches throughout the global economy.

Early adopters of SWB such as California and South Australia are already producing Super Power, and industries are beginning to innovate ways to seize this extraordinary opportunity as we start to move into a new era of energy superabundance.

The Clean Energy U-Curve shows us that we can decarbonize energy with SWB far faster, far more cheaply, and far more completely than conventional analyses and forecasts would have us believe. It is therefore essential that policymakers, investors, and other decisionmakers understand the Clean Energy U-Curve and its extraordinary implications for decarbonization and climate change.

An information upgrade whose time is now