TILLERSON HAD IT RIGHT 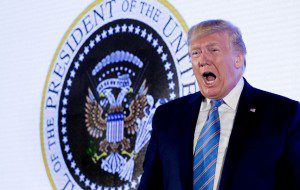 By any objective metric it would be kind to limit criticism of Trump to mere incompetence, but that would be ignoring the true depth of the man.  Of course, for those who continue to support Mr. Trump, this is beyond comprehension, looking away as they do, ignoring the all too apparent signs of his complete idiocy. Tillerson had it right when he called Trump, “a fucking moron.”  As recent evidence of Trump’s incapacity to think before speaking, a prime requirement for any business manager let alone a national leader, take these two recent gaffs.

The first should have been simply humiliating.  As the self-proclaimed genius blundered on through a speech addressing a conference of conservative teens, behind him was a fake Presidential seal featuring a two-headed eagle, the symbol of Soviet Russia, clutching a rack of golf clubs on the right and a bundle of cash on the left.  The Latin motto, “E pluribus unum” had been replaced with a Spanish one that translated to “45 is a puppet.”  The genius had failed to recognize that this was not the seal of the President of the United States, though it could not have been more obvious.

The second gaff is a little more complicated.  It involves a series of tweets aimed at Congressperson Elijah Cummings and the district he represents in Baltimore. These tweets are typical of those in his series of attacks on the chairman of the Congressional oversight Committee, “ Rep, Elijah Cummings has been a brutal bully, shouting and screaming at the great men & women of Border Patrol about conditions at the Southern Border, when actually his Baltimore district is FAR WORSE and more dangerous. His district is considered the Worst in the USA…..As proven last week during a Congressional tour, the Border is clean, efficient & well run, just very crowded. Cumming District is a disgusting, rat and rodent infested mess. If he spent more time in Baltimore, maybe he could help clean up this very dangerous & filthy place.”

If Trump had spent just a moment to reflect on the implications of this tirade, he would have realized that this is the very county where his son-in-law derives most of his income.  Jared Kushner’s wealth is largely sourced from the tenements he controls in the very district Cummings represents, some 9,000 low rent housing units, reaping him approximately $90,000,000 a year income, far more than his NYC luxury real estate holdings.  While Trump described the Baltimore area as one that “no human would want to live there,” he failed to observe that Kushner’s slum apartments had been cited for “hundreds of code violations and sub-standard housing.” As reported in the “Baltimore Sun” and the “Washington Post,” Kushner’s tenants complained of mice and mold and maggots. Perhaps this is what Trump was referring to when he described Baltimore as filthy and rat infested.  Is he suggesting to Cummings that he should pursue action against his son-in-law and clean up Baltimore?  Really?

No, the larger story lies in the fact that the policy and actions of Trump and his family create personal enrichment to the detriment of others utilizing the tools of government they control.  If Baltimore is the example, then considering our crumbling infrastructure, his foreign policy, the climbing deficit under his rule, his voodoo economics and trade policies, and complicity with our enemies, then we must expect that the United States will soon become such a place that “no human will want to live there.” Wow!!  There you have it… Trump’s simple answer to the immigration problem.

Never have filthy rats controlled the lives of so many humans.

Initiatives of Producer to Consumer Sustainability

Different Realities in the Age of Disillusionment