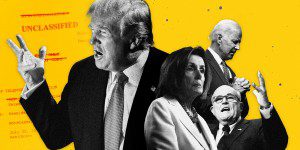 As the nation waits for the outcome of the Senate trial of Donald J. Trump, popular wisdom says it’s been predetermined by the Republican Senators who have already committed to a pre-trial verdict of not guilty.  What purports to be a serious consideration of the facts and evidence of the charges laid against Trump will in all likelihood be little more than a game show to validate who is the real Donald Trump.

He is a failed President. TRUE

He’s a successful businessman, an extremely stable genius. Somebody who tells it like it is.  FALSE

He’s just a ticket to ride. TRUE, but they’ll deny it.

He is a threat to the planet. TRUE

He is a puppet, a useful idiot. TRUE

He is a vulnerable ego-centric child, easily managed. TRUE

He is a self-admitted misogynist and philanderer, a bully, a documented racist, white supremacist, failed businessman, tax dodger, fraudster, loudmouth narcissist, deluded braggart, supporter of dangerous fringe groups like the Proud Boys, Qanon and the Klan, a faux Christian, a kidnapper of small children and babies, an accessory to murder, and ultimately a traitor guilty of sedition who went to extremes to stop the process of a certified election, in other words, an elected terrorist. TRUE

If we agree that the most likely outcome of the trial will be a “not guilty” verdict, then we must acknowledge that the verdict is being determined solely by the 30% misinformed and loyalist Trump base, those he controls and in turn controls the Republican Senators, for the weight of public opinion and that of the world is that Donald J. Trump is an aberration, a stain on democracy, a threat to the planet and future generations

It’s minority rule by a misinformed segment of the public.

C’mon GOP Senators do your job, pull up your big-boy pants and man up!

Get Mobilized and Make Love Go Viral!
Related Topics:impeachSenatetrialTrump
Up Next