The Kremlin and the Capitol 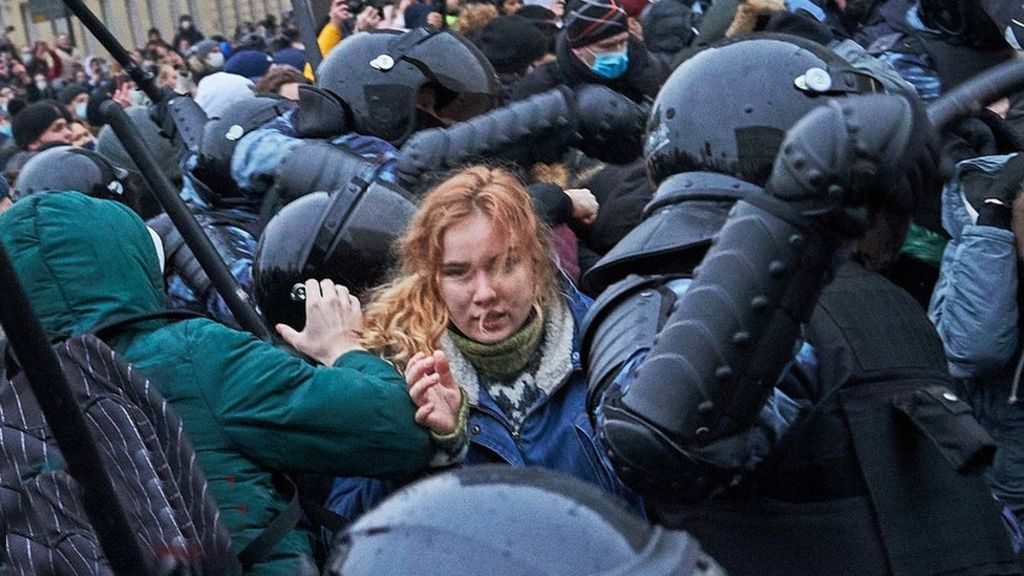 February 2, 2021. Tonight, as riot police in Moscow surround the Kremlin in an effort to contain peaceful protests,  as American observers, we have been given a rare opportunity for introspection and reflection.  Live video news coverage shows images of the supporters of Alexei Navalny, the opposition leader to Vladimir Putin as they are being detained, many of them single young women who can be seen walking unrestrained alongside a heavily body-armored police escort. Quietly and cheerfully they offer the quintessential symbol of the late 60’s, the peace sign,  to the cameras of CNN. Such images stand in stark contrast to the images of riotous Americans storming the Capitol building on January 6th.

In many ways, the Kremlin is to Russians what the Capitol building is to Americans.  In each country, the protests have arisen for pretty much the same reason, the right of its citizens to determine who shall lead their government, and the protests focused around these two great cultural symbols.  And in both cases the government has deemed it necessary to surround the seat of government to defend it from its citizens.

In the case of Russia, under the totalitarian rule of Vladimir Putin, the Russian people, who do not enjoy the same freedoms such as freedom of speech and freedom of assembly, manifest their dissatisfaction by peacefully protesting the unlawful treatment of Navalny, who was convicted and imprisoned on fake charges of violating his parole by failing to keep an appointment while hospitalized for treatment of the poisoning he suffered at the hands of Putin. The truth is that this is part and parcel of the Putin administration’s policy to  squash opposition by eliminating voices of dissent, in this case the most prominent voice, Alexei Navalny.

In the United States, in our very different democratic system, American citizens who enjoy Constitutional protection of their rights to freedom of speech and freedom of assembly, were also fueled by fake charges but of a different sort, nevertheless just as in Russia, brought about by their leader. Choosing to express their dissatisfaction through a violent, armed assault on the houses of Congress resulting in five deaths, including the brutal beating of a Capitol guard, such was their anger that they sought to kill leaders they regarded as “progressive.”  Nancy Pelosi and OAC head the list. While chanting “hang Mike Pence” they overwhelmed the police and swarmed the halls of Congress, looting and vandalizing the very sacred institution that guarantees their freedoms.

Does it not strike anyone else as odd that in a country informed by propaganda, its citizens can nevertheless see more clearly and react more rationally than the citizens of our country with all the benefits of a free and truthful media; that the simple phrase of “fake news” uttered repeatedly by the mouth of a disingenuous leader and his puppets can supplant an obvious reality with a looney-tunes version of the day’s events, such that its citizens act out murderously.

At first my reaction is that we should be ashamed, that we who have so much understand so little.  But then, as I remember that while they had a four girl rock band, Pussy Riot, we had a multi-million, pink-pussy-hatted global protest that originated here and my sense of pride overwhelms me. God bless women, the voices of reason.

Staring Into The Eyes of The Devil

Trumpism and the GOP, an Unholy Marriage