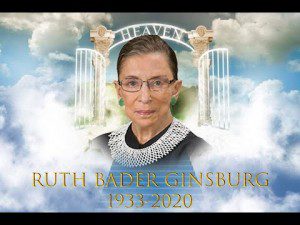 With the news that more prominent political figures in the Trump arena have joined their boss in the misery of his declining health, having been given the gift of Covid, a gift that keeps on giving, it looks like the likely event that spawned this chain reaction of the willfully ignorant was the super-spreader Whitehouse event announcing the nomination of Amy Coney Barrett. I have to wonder if perhaps RBG is looking down from heaven, wielding more influence than ever before, having been embraced by the “Court of Last Resort.”
Recently absolved of the residual guilt in my crisis of conscience, I am now unencumbered in my enjoyment of what looks to be the exciting “second act” of this unfolding drama. Today it was announced that Trump’s campaign manager, Bill Stepian, the chair of the RNC, Ronna McDaniel and three GOP Senators, two of which sit on the Judiciary Committee that is the first stop in the nominating process of Ms. Coney Barrett, (and incidentally getting lost in the media attention given Trump is the infection of “the mouth that roared,” Kellyanne Conway. All praise on high to a wise and just God.) have all contracted the virus. It’s like the ultimate cliffhanger in a cable series, where there appears to be no way the hero can be saved from the impossible odds he faces and yet with no way out, in the next episode, the most clever of writers invents a loophole that blindsides the jaded audience with the hope that the hero will prevail, resurrected and resuscitated until the next impossible cliffhanger.
Until then, we sit in our darkened dens, wondering what the consequences will be, what is the meaning of it all for the nomination of Amy Coney Barrett? Can the nomination be moved through the Judiciary Committee minus two members? Will the newly-infected be allowed to report sick to support her nomination knowing full well that the risk of infecting more GOP stalwarts is highly probable or… will there be new rules created allowing a work-from-home “Zoom” vote, and yet, the greater issue, their absence from the ultimate vote, the rubber-stamped approval of the GOP Senate, hangs over this drama with all the uncertainty and fear that Covid infects its victims with. And in this rippling pandemic, as Covid claims new recruits daily, can the trickle of infected and absent GOP Senators perpetuate inaction on the confirmation until beyond January 21st of the coming year, when Democrats will have regained control of the Senate? It gives me pause to wonder if the GOP did not fully understand the consequences of taking on RBG from the grave.
Get Mobilized and Make Love Go Viral!
Related Topics:Amy Coney BarrettCovidRBGTrump
Up Next