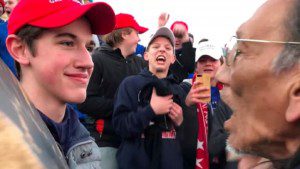 January 18, 2019 different mixed groups of protesters confront one another on the steps of the Lincoln Memorial.  In the news coverage of the event, Nick Sandman, a student at Covington Catholic High School appears to disrespectfully confront a native American elder who is singing and playing a hand-drum, by entering his personal space and remaining there at an uncomfortable distance that would have made a weaker person retreat.  Not so the elder, as Nick, sporting an undeniable smirk, attempted to stare him down, but to no avail.

In the ensuing events, in the spirit of American resourcefulness Nick’s parents unleashed a team of legal ambulance chasers on every news source covering the event by presenting a possible alternative view of the teen’s actions, mounting suits for libel and slander in the millions of dollars.  Weighing the relative costs of fight or flight, the corporate attorneys for each of the media challenged with a suit predictably chose to settle, as is always the case for an undisclosed amount, and Nick Sandman was rewarded for his questionable behavior by becoming an undisclosed millionaire.

Taking advantage of a legal system’s procedural loopholes is one of the most significant earmarks of the Trump Administration’s playbook.  So it should come as no surprise that this errant teen, Nick Sandmann, should rise in national prominence as the poster boy of the GOP, by speaking at their convention this month.

Other highlighted speakers include Patricia and Mark McCloskey, the couple who pointed guns at protesters outside of their St Louis home last June, screaming for them to get off their property. Demonstrators had been walking on their street to protest at the Mayor’s residence. Patricia and Mark were each charged with “felony unlawful use of a weapon.”   Nevertheless, Trump, the Missouri Governor and the State’s Attorney General all lobbied that the charges be dropped.

Apparently to the GOP, the illegal use of firearms to threaten demonstrators is a legitimate form of defense against political movements that you disagree with.  Witness William Barr’s use of military force against peaceful protesters sweeping the streets for Trump’s Bible photo-op at St. John’s Episcopal Church in Washington D.C., or Trumps’ interventions in cities like Portland where unmarked, camouflaged agents kidnapped protesters, whisking them off to undesignated destinations without any respect for established legal rights and routine, customary procedures.

Make no mistake, this marks the devolution of conservative principles and specifically the GOP party through their perversion of the meaning of “freedom” and their metamorphosis into just another Trump Reality Show.