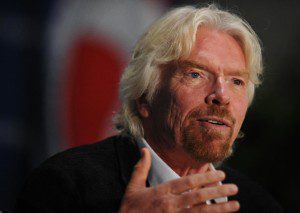 “Obviously I’ve got three airlines, it won’t be great news in the short term, but it definitely needs to see a global carbon tax,” the businessman said.

He urged governments and businesses to come up with big innovations to counter climate change. Money from taxing “dirty industries,” he said, should “go into a big innovation pot.”

Discover how you or your organization can become a collaborator in creation.

It would be a world, he said, where fuel would be cheaper than today to benefit hospitals and schools.

“Countries that are big oil producers, coal producers are going to have to adapt but the vast majority of the world will benefit. It will pull everyone out of poverty and it will be a really exciting world to aim for.”

Branson is one of Britain’s most high-profile businessmen, whom Forbes estimates to be worth $4.9 billion.

He is also co-founder of The B Team, a coalition of global business leaders working to advance the wellbeing of the planet.

Branson spoke on a panel of business leaders as the UN General Assembly in New York prepares to adopt Sustainable Development Goals, a new 15-year agenda to eliminate poverty