Singing to the Choir 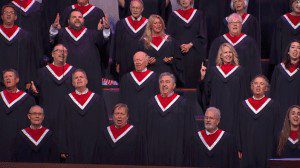 Some forty-five years ago, I was newly married and welcomed into my new, extended family. Not long after that over dinner with the family, I was witness to a remarkable conversation. I listened in disbelief as a surprising story unfolded. Purported to be a story of faith, it was told by an intelligent young woman who had recently emerged as deeply religious in a fundamentalist sort of way, devoted to Jesus and strictly dogmatized by a literal interpretation of the Bible.
She told of a day when she was running very late for work. Driving on busy Chicago streets, there were many intersections between her house and her job, all with traffic lights. Realizing that she would never make it on time if she stopped for each of the red lights, she decided to do the only thing that might remedy her problem–run all the lights from home to work. She reasoned that Jesus would protect her. It was a matter of faith. So, as she approached each traffic light she recited a short prayer and without looking left or right, drove at full speed through the intersection. She repeated this process at every intersection until she arrive safely at her jobsite. Relishing her success, having proven her faith as she did not arrive late, she enthusiastically told the story to the family whose embarrassed laughter at her folly filled the room. It never occurred to her that she had put the lives of others in extreme danger, that at any moment she could end the lives of mothers and children on the way to day-care, or seniors on the way to the doctor, or young college grads on their way to their first job, innocents all, unaware of her distorted belief system and false sense of priorities. Let us not confuse faith with a belief system.
In the age of the Corona-virus, as the United States reports over 50,000 new infections each day, a daily total more than the Wuhan province total for the entire pandemic period, the evidence of our collective folly should be sufficiently apparent. Too many people have ignored the restrictions imposed or recommended, and prioritized their personal objectives over regard for the safety of others. They refuse to wear a mask. They ignore lockdowns. They do not observe social distancing. Governors of states such as Florida and many of the Southern States, have opened up their states too early and have allowed large congregations of people to assemble with dire consequences. In one instance a Texas choir of one hundred people singing to Mike Pence had one Covid-19 infected member singing with them. That one instance proved severely disastrous as it spread that infection to 87 others in the choir. At Trump’s rally in Tulsa, Herman Cain, approximately the same age as the Donald, was infected. A person of his age has a 20% chance of dying from the infection. Whose folly will it be to tell this story enthusiastically? A battle for lives of innocents has deteriorated into a political struggle for the minds of the faithful, the uninformed and misinformed 40% who will determine how we all will live the next four years, that is, if we live at all.
The virus has created a unique political pendulum regarding the coming election. Margins in states like Florida are so thin that Trump cannot afford to lose any support, yet his lack of an effective policy regarding the pandemic is culling Republican voters form the Florida rolls by converting them to deceased statistics. And the same can be said of Texas, Arizona, Alaska, and many other “Red” states. Red both on political and pandemic maps, his lack of policy is thinning living voters, particularly the virus susceptible seniors who have blindly supported him. Not so smart, Donald.
On the other hand, the GOP slather at the possibility that the virus will affect Democratic voter turnout, with long lines and fear of contagion. To amplify this problem, they have attacked mail-in ballots and even gone so far as to try and defund the post-office, so as to put the assassin’s double-tapped headshot into the body of the Democratic voter. Is this what freedom looks like today?
It’s clear what we have to do. Let’s get to it.
Get Mobilized and Make Love Go Viral!
Related Topics:covid 19electionmail in ballotPenceTrumpovirus
Up Next

Understanding Conservatism in the Age of the Pandemic