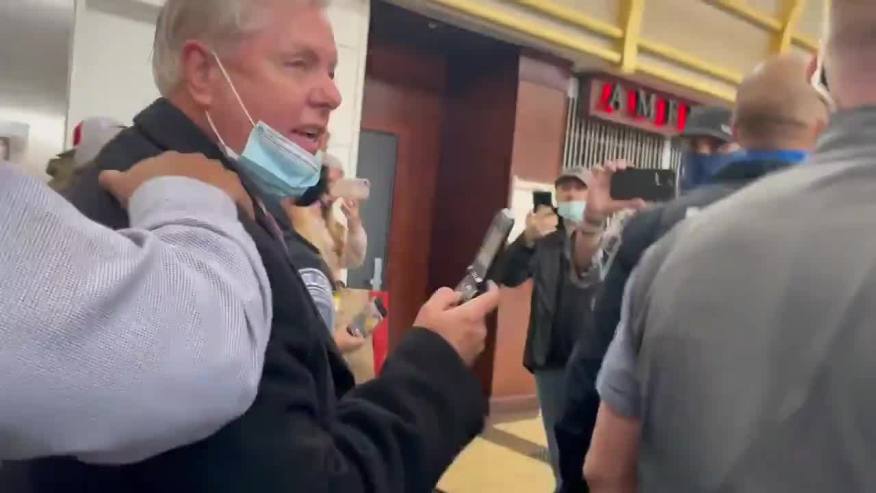 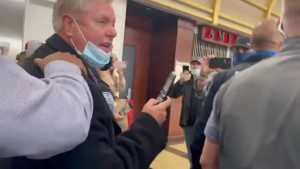 Pity not poor Lindsey Graham, caught in his own web of deceit.  On Friday January 8, at Reagan National Airport, under heavy security as he was attempting to board his plane returning home, he was mobbed by radicalized Trumpers screaming insults and warnings, the outcome of the stand he took on the Senate floor saying, “Enough is enough.”  The once complicit Lindsey was now trying to straddle the fence with a dollop of truth scooped upon his record of lies, the many that had formerly endeared him to the 71 million Trumpers who were now turning on him, publicly denouncing him as “Traitor,” “human garbage,”  “fucking asshole,” and “Piece of shit,” telling him that, “You know it was rigged,” and reminding him that, “It’s going to be like this wherever you go.”

And where can he go?  He debased himself years ago jumping on Team Trump, wetting himself carrying water for the big man.  Lies upon lies melted away the former man who in 2015 had said that Trump was “a race-baiting, xenophobic bigot.”  And for the next four years, Graham jockeyed for position among the many Republicans who understood that to be re-elected required an allegiance to Trump who had hypnotized his base with a swirl of lies and would easily turn to primary any one or all of them should their loyalty flag for even one day. Graham had long ago broken ties with reasonable people, especially those who remained in the Republican party on the principle and memories of what it had once been and knew better.

Trump represented a moral conundrum, a paradox, a Catch 22.  Supporting him required abandoning any sense of a moral authority, and traditional ethics, hardly a roadmap for conservatism.  On the other hand, to maintain integrity meant a swift end to your job and probably your career as well.  Lindsey chose the former and that necessarily meant he plummeted in support from voters with even a minimum degree of awareness.  Ah, but he had the admiration of the Trumpers, a much larger number, a forceful voting block under the command of the race-baiting, xenophobic bigot.”

Of course, this was not the first time Graham had made a severe about-face.

“I want you to use my words against me,” Graham said during a 2016 Senate meeting. Referring to a future Supreme Court nomination, “If there’s a Republican president in 2016 and a vacancy occurs in the last year of the first term, you can say Lindsey Graham said let’s let the next president, whoever it might be, make that nomination.”

So it was that in his half-hearted effort to restore calm after championing the claims of voter fraud, he was soon to learn that enough was not enough.  He had unwittingly cut ties with the unforgiving Trumpers who ruled his fate, and like an untrained dog had committed the only unforgivable sin.  He had shit his own bed.