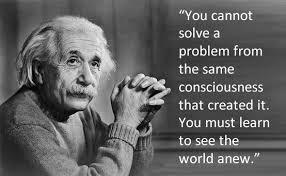 It was an interesting way to connect the rest of the world with our firepower, but concepts and technology are rarely controlled or limited by national borders or the worship of national sovereignty.

The singular purpose of the ICBM was to deliver mass death and destruction to any other nation that had the economic and technological power to threaten our view of the world and our lead in developing nuclear weapons.  These new weapons contained an unprecedented capacity for destroying not just your enemy, but its cities and civilians inhabiting them.  Civilians who are probably no more deserving of death than we were.

Today, thanks to the exponential growth, affordability, and accessibility of virtually every technology the world is awash in the means of mass death and destruction.  And there is less and less capacity for governments to defend against them given the technological advances in speed, stealth, number, and their anonymous nature.   This last factor and the willingness of attackers to die for their cause even reduces the effectiveness of deterrence as a means of insuring security.

Some experts would argue that the acronym WMD be reserved only for nuclear weapons as it was originally intended.  But understanding the killing capacity of biological weapons one can make an indisputable argument that one well-designed bioweapon can kill more people (billions) than one nuclear weapon (a few million at most).  And drone delivery of a bioweapon is infinitely easier, cheaper and less likely to be detected than an ICBM delivered nuke.  A Nuclear ICBM can destroy a city.  A bioweapon can destroy civilization.

Twenty years ago, I toured US campuses and civic institutions speaking about the growing variety and volume of national security threats we face. My introduction to the topic was a simple graph with three simple lines.  The first line represented the exponential growth of all technologies bending steadily upward and out the top of the chart.  The second line represented our linear thinking process that rose upward and extended off the right side of the chart.  The last line represented our governments history of change. A flat line extending across the bottom of the chart with a spike after September 11, 2001.  A single attack by 19 men using razor blades and our own passenger planes instead of ICBMs.  Since then that flat line has been heading downward…resisting any chance of the transformational change needed to prevent or better recover from the coming threats.

People today might debate calling those commercial jets WMD. But failing to recognize that a drone used to deliver a biological weapon is a WMD is clear evidence of the dangers of linear thinking and the suicidal nature of our government’s resistance to any change.

Combine linear thinking with our government’s addiction to national sovereignty and its unswerving worship of our Constitution (a document specifically designed to resist rapid and significant change) and the transformational changes needed to avoid catastrophic consequences becomes unthinkable.

Security has always been difficult.  The human bodies systems and structures contain so many vulnerabilities – and the human mind such creativity in finding ways to disrupt them, that security is essentially an illusion.  And unachievable if someone is committed to the opposite.

Security is not a function of armament or disarmament. It is a function of justice. Injustices drive violence. And technologies only increase our killing capacity as well as our dependence on it for the illusion of security. The best we can do is create a social, political and economic environment where the willingness to go to war or commit mass murder is virtually non-existent. Technology is not the answer. The golden rule is…think Universal Declaration of Human Rights or achieving the 17 Sustainable Development Goals. Holding people accountable for injustices by the rule of law or people will turn to the law of force to seek justice.

The evolution of weaponry will end only when we decide that justice and human survival is more important than any other political, economic, or religious priority.

Time and technology are not on our side.  But we do have the resources and the know how to make a more just, sustainable, and fulfilling future for all.  It all depends on what we are committed to.    America First?, Or, liberty and justice for all?

You might wonder why today was introduced as ‘WMD Appreciation Day’ instead of WMD Awareness Day.   Fact is, we’ve always been aware of WMD.  But we’ve never really appreciated the value of WMD in making us rethink our worship of national sovereignty and our faith in technology to protect us.  They can’t.  Only a global justice system has that possibility.

“Love for others and respect for their rights and their human dignity, irrespective of who or what they are, no matter what religion – or none – that they choose to follow, will bring about real change and set in motion proper relationships.  With such relationships built on equality and trust, we can work together on so many of the threats to our common humanity.”  – Mairead Maguire