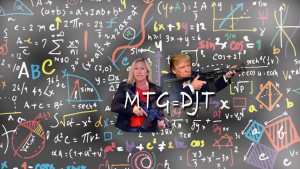 It was in 9th grade that I was first introduced to algebra.  I loved the purity of the logic it embraced.  If A equals C and B equals C, then A equals B.  How clean.  How easily understood.

So it is that in passing years, I have come to understand that the intrinsic lessons provided by an education are not the specific data imparted, but the shaping of reason, learning how to think.  What use is algebra if the lessons it offers cannot be understood in other endeavors?

Let’s take for example the recent bru-ha over Marjorie Taylor Greene and apply some algebra.  If MTG embraces Qanon, the range of looney conspiracy theories and the lies regarding the 2020 election, AND Donald Trump embraces those very same things, then MTG=DJT.  OK, sorry, I’ll make it simpler in more formulaic terms.  If MTG=Q and DJT=Q, then MTG=DJT.

So… if Republican leadership feels they must consider ridding the party of the sideshow circus created by Marjorie Taylor Greene by stripping her of committee positions and laying contingency plans to primary her in the next election, then they have already realized that the ideas she embraces (Qanon conspiracy theories; Jewish space-lasers caused wildfires in California; The Las Vegas Gun Massacre, Sandyhook and Marjorie Stoneman Douglas High shootings were staged events; the 2020 election was rigged and stolen etc.) coupled with her propensity to support violent protest, and has in the past even advocated assassinating Democratic Party leaders as a means to restoring democracy, does not represent any part of mainstream Republican policy. Whew!

Now whether they may choose to rid the party of the duly elected Greene or not, they clearly understand that she is a festering gangrene on the Republican body.  So again, I must ask, if A=C and B=C then does not A=B.  Cannot Republican leaders see that Donald Trump must also be cut loose.  If MTG must go in due time, so must DJT.

But as was expected, Kevin McCarthy met with the unrepentant Greene and wholly swallowed her predictable pivot from her very real “before Congress” persona to her new slip-on persona as the “busted, trapped and I’ll be a good little soldier for the cause, pinky-promise” Greene.

But as if that was not enough, the following day Greene appeared in her own defense at a congressional hearing on national TV, where she proffered the “Jesus” defense, a pathetic plea that every rehabilitated, petty drug trafficker uses to reduce jail time.  Veritably overnight, in a carefully scripted 10 minute speech, as much a call to arms as a repentance,  the embattled Greene discovered religion, embraced Jesus and pleaded that she, a sinner, should be forgiven.  She’s read the playbook at least five times over. All that was missing was the tell-tale sign of the mendacious, “have a blessed day.”

Trump, on the other hand has not and will not pivot.  Expect the Party to react in the same way as they did with Greene.  They do not have the ethical spine to do what is needed to ultimately save and grow the party.  They’ll be looking for an out, but the raging narcissist that Trump is, will be unable to comply, maintaining his victimhood.  The Party needs the votes he controls, or so they think.  But now it’s too late for them, because Greene is on her way to using her position as “victim number two” to become the next rising star in the Republican Party. Praise Jesus.  It’s a miracle.  The ventriloquist’s dummy has breathed life.