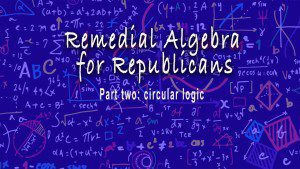 Anyone versed in Microsoft Excel must have a basic understanding of Algebraic formulas to make it function at full capacity.  At one time or another many of us have seen the warning “Circular Logic” appear on our screen.  One of the simplest mistakes to make is to have the field that contains the result inadvertently included in the formula, returning a warning that the equation is invalid due to circular logic.

For example, take the plight of all the would-be Bernie Sanders voters who were told, “he can’t win, ”…  and reacted, therefore, “I’m not voting for him,” … which meant in turn that “he can’t win.”  That’s circular logic.

If Republican Party leaders are ever to recover their party from the grip of Donald Trump and return it to the noble principles it engendered in that time before tactics that began with Newt Gingrich and mutated through the Tea party to become Trumpism, then they must convict Trump on the impeachment charges.  You don’t have to agree with conservative political philosophy to understand it has a proper place in American politics.  But in the current climate, this mutated form of engagement between the two parties either results in steam-rolling or obstructionism as the only choices for a means to govern, neither of which is useful.

In private, Republican Senators and Representatives deplore Donald Trump and wish they were done with him.  Publicly, virtually every Democrat agrees with them. It would seem to any rational person that the only sure path to unity is to the conviction of Donald Trump.

Get Mobilized and Make Love Go Viral!
Related Topics:congressimpeachSenateTrump
Up Next

The Future Will Be Decentralized