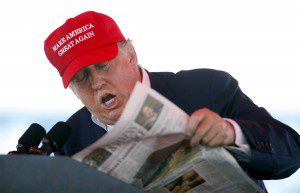 So it is no wonder that Donald Trump struggles with reading.  He decries structure and relishes chaos.  Anything that imposes a limitation on his time and requires attention not devoted to golf, television and cheeseburgers, such as reading boring reports, is dispensed with. He prefers to spend more time ensconced in front of his TV watching Fox news to get his “facts” and talking points for his tweets.  Playing to the loyal adoration of his base is more important than reading his daily national security briefs. This is how our country is being run.

Trump struggles with all things sourced from language.  He cannot pronounce many standardized and easily recognizable words, as “teleprompter Trump” speeches can attest to.  His misspellings are legendary, from “Covfefe” to “Honered,” to “unpresidented” and “Peach on Earth.” and even printed documents such as the misprints on the invitation to the “State of the Uniom” or on his official inaugural poster did not escape his magnetic pull to be so very wrong in public.

Oh sure, some of those are typos, but not all.  And, of those that are, is the “stable genius” too lazy or too vain to use his spell-checker, or is it that he just has never learned how?  If ignorant is too strong a word, call him sloppy and careless. And what of those who surround him?  Could not someone have spotted the typo in the Inaugural poster, and just maybe, just maybe,  rehearsed him through his speeches to coach him on how to read those three-syllable words adults use and he struggles to pronounce.  Judging by this very simple metric any third grade teacher would surely flunk Donald and send him back to remedial reading summer school before advancing him to the presidency.

Peaceful Protest vs. “Law and Order!”

A Quantum Leap in Conscious Evolution