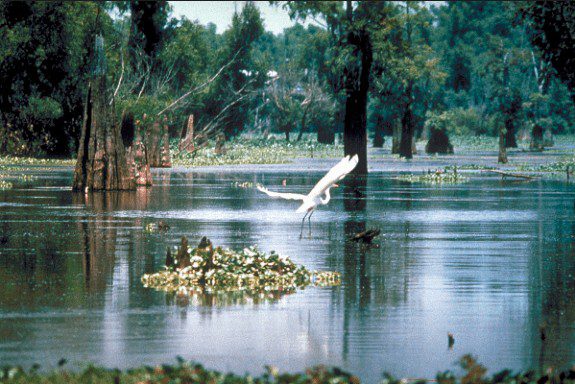 Many years ago, I had the good fortune to spend some significant time in the Atchafalaya Swamp in Louisiana.  As anyone who has ever visited the swamp can tell you, it is a thing of immense beauty, and therein lies its danger. The swamp is a delicate ecosystem and is home to many varieties of interdependent species.  Beneath the surface reflections of the deep-rooted cypress trees on the glistening swamp waters lurk venomous snakes and hungry alligators, while gliding effortlessly above are elegant heron and a variety of migratory birds.

Now as I look around at our political swamp, I am beginning to see something unusual just beneath the surface reflections that distract and obstruct a clear view of the depths below.  It’s an early sign as campaign season begins, but it’s a telling one, and while there are not enough samples to determine if this is a national trend, I am sure it means something significant.

Two candidates in Ohio are running campaign ads devoid of party affiliation.  Aftab Pureval, the 35-year-old Democratic Party candidate for Congress, and Mike Dewine, the seasoned Republican candidate for Governor, are each running ads that address their performance in past official positions rather than align themselves with the strategy of their parties. Furthermore, nowhere in these spots is there any identification with their respective parties, not one spoken word, not a single graphic, text or reference. They are each running a campaign based on their own merits hoping to break free from the current political climate and avoid the Trump factor, the most uncertain and divisive element in polling today’s voters.

Republican reaction to Trump is as unpredictable as the path of a hurricane.  Even in “Red States” candidates are uncertain as to whether to align with Trump or not.  His endorsement could mean a solid victory or spell a certain death, such is his influence. On the Democratic side, party leadership fears a potential voter backlash for attacking Trump and are walking on the eggshells of his broken administration, avoiding the obvious corruption and misdeeds lest they be forced to defend their position that the quacking duck is indeed a duck.

It would be too easy to view these departures from party line as cowardly, but in truth, even their respective parties have no clear party line. No, rather I see their strategy as an act of pragmatic independence and political courage, each standing on their own merits. You don’t have to reach deep into the shallow swamp to find mud to throw.  That candidates should choose to stay close to the surface is a commendable lesson, even if it is the only one that even by default makes any sense.

Get Mobilized and Make Love Go Viral!
Related Topics:DemocratDewineelectionPurevalRepublicanTrump
Up Next