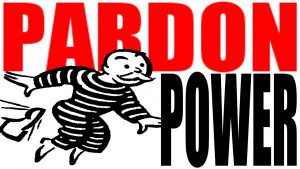 As we all brace for the inevitable, upcoming pardons to be issued by Trump, one thing is for sure. Each and every one will be a confirmation of the extent of his corruption.  But are they legal?  Better yet, should they be?  Perhaps it’s time to address the loopholes in the language of the pardoning power.

Pardons are not universal but can be categorized as several types.  The pardoning power was intended as the “court of last resort” to address grievances in the application of the law and administer justice to the innocent and wrongly convicted.

Soon, perhaps today, Trump will attempt to pervert the pardoning power to include the following types:

If this is allowed to stand, it will mean that any President may do any illegal thing with impunity, knowing that they can pardon themselves before leaving office.  It is contrary to the very foundation of our legal system and subjects us to untold and unimaginable criminal outrage like inciting a riot to storm the capitol building seeking to hang or kill our leaders or conspiring with our enemies, or stealing from the public treasury, or shooting aliens as they cross the border or robbing mothers of their babies or caging innocent young children or committing war crimes.  Need I go on?  (look away, Jay)

This pardon is unspecified in nature.  It addresses no crime but allows for the pardoning of any crime that may arise.  How can someone be pardoned if not at least indicted or convicted of a crime?  The very idea is gobbledy-gook.

This pardon anticipates a need to forgive known illegal activity that has yet to be discovered or addressed.  For example, if you have engaged known co-conspirators in your own illegal activities, or enlisted henchmen to execute unthinkable atrocities in your name, you can merely pardon them.  Imagine Hitler pardoning Eichmann or Goebbels and it’s easy to understand the folly of this interpretation of the pardoning power.

This interpretation allows the pardoning power to apply to anything and everything without consideration for any specifics.  It pardons a life of illegal activity rather than any one specific charge.  Imagine a serial killer who is from the President’s family or any family member who is a serial criminal engaged in a life of criminal activity and you can understand the wrongful nature of this interpretation.

There must be exemptions to the pardoning power to include oneself, relatives, and those directed by, or engaged in activities that have mutual benefit to a President.

I for one hope that the Trump executes a self-pardon.  It will force the Attorney General to charge him with a federal crime in order that the pardon may be tested and laid to rest in the junk heap of broken federal statutes.