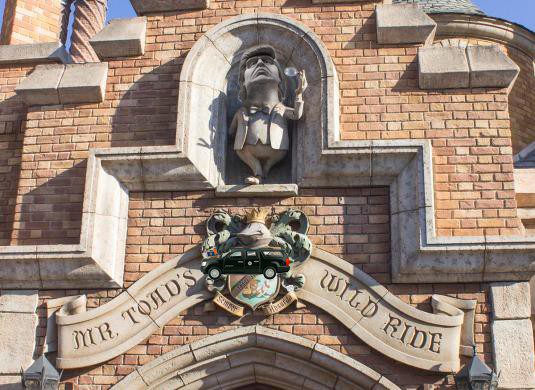 After observing the enthusiasm of Trump’s fanboys that greeted his joyride in the “Deathmobile,” not one to miss a marketing opportunity, Disney has announced that there will be some immediate modifications to Mr. Toad’s Wild Ride to enhance the thrills. As in all Disney endeavors, the air of authenticity (excuse the pun) will be maintained as each hermetically sealed vehicle will be prepared with a spray of air-born Coronavirus and riders will be given souvenir protective masks printed with “I survived Mr. Toad’s Wild Ride” as they deboard the ride. For an extra $35, riders may rent SCUBA gear to feel the full experience of a current Secret Service Agent assigned to drive Mr. Toad on a victory lap, although in all candor these specialized agents, former Navy SEALS are still in training. While Disney has offered the Wild Ride as a potential training site to expedite effective Presidential security, the service is still considering whether it is more cost effective to just lock agents up in the real vehicle for a prolonged period of time or wash their hands (dammit another pun!) and take the offer.

All this comes on the heels of the disaster from the lack of planning on the maiden voyage of Mr. Toad. The two unwitting Secret Service Agents required to chauffeur the President, wearing only cloth masks in a vehicle with a closed recirculating air system and a highly contagious passenger, dutifully fell on their swords for the nation. Now, as casualties unable to qualify for a Purple Heart, they must be removed from duty and quarantined for 14 days while they and their families ride out the uncertain consequences of their forced risk. They may never get to use their new SCUBA gear.

While they wait it out in solitary confinement, others who were administered healthy doses of the virus at the super-spreader Whitehouse event announcing the nomination of Amy Coney Barrett, have declined to self-quarantine, most notably, the recently infirmed, rabid loyalist Kayleigh McEnany has declared rather capriciously that she intends to report to work at the Whitehouse every day rather than work from home, maintaining that her work qualifies her as an essential service, you know like police, firefighters, bus drivers and trash collectors, the basic services that keep society from falling apart, the services that cannot work from home.

Just as trade names like Baker, Arrowsmith, Carpenter, Miller, Farmer, Mason, Butler and derivatives like Tillerson, have become an invisible part of our everyday speech, so too will the name McEnany be assimilated and ignored in the generations that follow.

The aptly named Kayleigh McEnany (pronounced mack-a-ninny) fits the very definition of the source words from which her name is derived:

“Mac:” a term of address for a person whose name is not known to the speaker—a useful island of escape for a deteriorating mind, one not a “stable genius.”

OR. Possibly more fitting…
“Mack:” noun/ a pimp or verb/ to flirt or make sexual advances on someone (often followed by “on”) Oh, yeh, she’s the noun alright.

As a final note, let’s turn to the timeline of when the President had his last negative Covid test. This is very important because the specific answer regarding this question has never been offered and is relevant to evaluate the President’s calculated role in infecting his staff, political appointments, elected officials, consultants, contributors to his campaign, family, friends and his Secret Service details, a list that grows each day at a dangerous rate. It’s oh, so necessary for contact tracing, even though perhaps too late to protect the unwitting wives and children in the families of those within his inner circle. As the list of infectees (not a real word. I made that up) continues to grow, names of the Secret Service, Whitehouse staffers and housecleaning staff have all become part of the list of casualties resulting from Trump’s malicious negligence and the press corp reports that the offices of the Whitehouse are as empty as a ghost town. The rats have fled the ship leaving it to flounder on its own.
All indications are that Trump made close encounter public appearances, with a callous, heartless, and reckless lack of concern, the premeditated act of putting others at risk for the sake of his poll ratings and wishful election favorability. So my advice to all of you who remain is get off the wild ride while you still can.

Get Mobilized and Make Love Go Viral!
Related Topics:CovidKayleigh McEnanyTrump
Up Next

An Outpouring of Love