Does Money makes the world go round (or not). 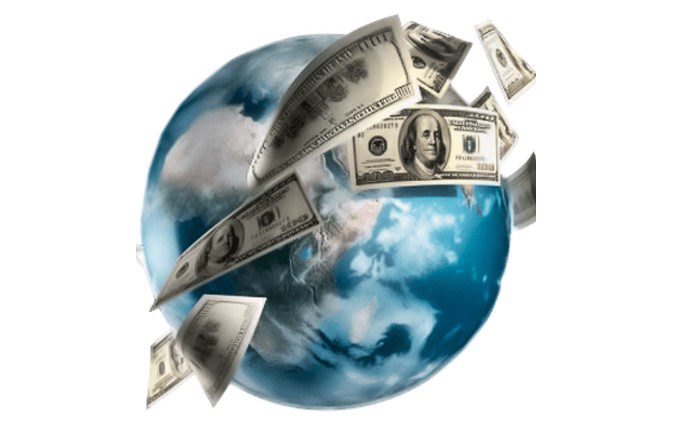 For those that have never delved into chaos theory, the simple way to understand it is to think of it as a feedback loop.  A stage microphone with an amplifier placed directly behind it is a good way to visualize it. As a voice is expressed through the microphone, the sound of that voice is amplified .  Now, the microphone picks up the amplified sound of the voice as well, sending it back again to the amp and so on and so on as the feedback noise becomes unbearable and the microphone must be switched off

Decisions made long ago echo chaotically through time resonating far into the present and the future.

When Donald Trump took office he followed up on his promise to cut big government.  Simply put, this meant cutting budgets, reducing staff, crippling departments and agencies and eliminating government oversight.  Now, as the Corona Virus has emerged, we find ourselves defenseless in its face, because the very safeguards that were in place before Trump have been eliminated.  The feedback loop has been initiated.  No safeguards meant the spread of more disease, which in turn meant even more spread and so on and so on.  Will Somebody please turn off Trump’s microphone?

But it’s too late. The turbulence created by the disease has moved into our economic system.  When we understood that the only way to mitigate the continual spread of the disease was to short circuit the feedback loop by “social distancing” loose policies were put in place to isolate individuals from each other, which meant great numbers of people could not go in to work as usual or keep their businesses open, the economic consequence of which are staggering.

As various plans were initiated to provide a safety net for workers, employers, and  American businesses both small and large, massive funding was made available in the form of unemployment compensation and loans that do not need to be repaid, so that the economy of our nation would not disintegrate entirely.  Does that sound like the dreaded socialism to anybody?  Nevertheless, as anyone clearly knows, this cannot go on forever, so the only solution, the one currently being considered, is to raise taxes. Does that sound like Big Government to anybody?

The blessing of the Corona Virus is that its effects are readily understood because the outcome grows continually and a response is needed.  This is quite different from Global Warming, where the effects are slowly growing pushed into the future and easily misunderstood. Can we not see that the increasing rate of hurricanes, tornadoes, floods and forest fires is due to global warming.  Al Gore made it his mission to take the scientific evidence and make it understood, yet with all the warnings, we ignored it and the feedback loop that was started eventually spread to our economic system and massive funding was made available for disaster relief, over and over again due to a failure of government to respond to a crisis put off to the future.

Now it gets interesting because in every way when government was reduced, problems were increased, so government was increased in response and we pay a larger cost in remediation than we would have in prevention.  Hey. But thank God we don’t live in a socialist society run by big government.

No, we live in a pseudo democracy run by a popularity contest that elects faux leaders to make us feel good while they bleed us to enrich themselves and their friends.

Does anyone stop to question Trump’s decision to end the self-quarantine as one of self-interest?  Let’s face it, Trump is in the hotel business.  Imagine the losses he is taking due to the shut-down of his properties– hotels, resorts and golf courses.  But we are in such pain that we do not see his decision as anything other than beneficial to us.  No, we gave away the right to complain a long time ago when nothing was done regarding Trump’s continued ownership of properties that conflict with his duties as President and his financial involvements with other governments and huge debts that cripple his ability to make anything other than decisions that reflect his own interests.  It’s amazing to me that we have allowed this Reality TV star to govern a nation.  He doesn’t even wear a cowboy hat, much less a mask.

Get Mobilized and Make Love Go Viral!
Related Topics:coronavirusTrump
Up Next