The responsibility of Media is to Serve us 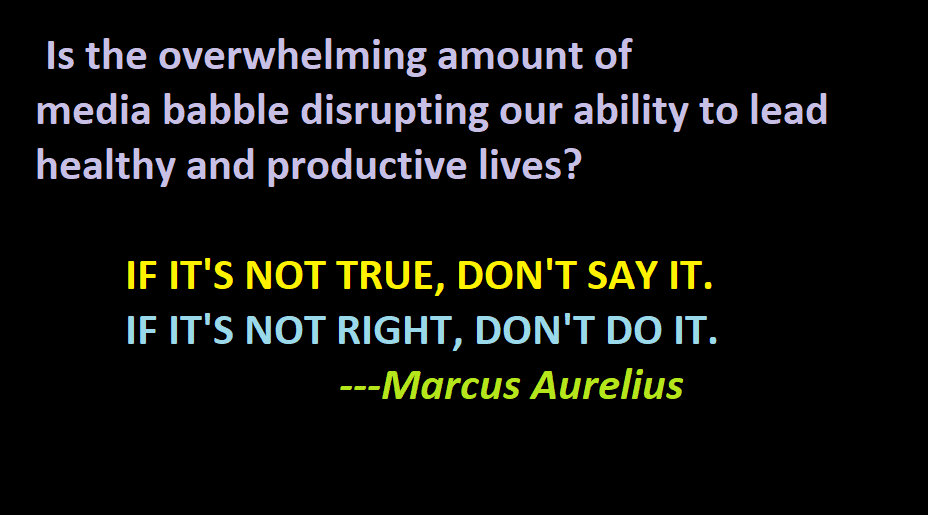 As new developments and improvements in our systems of public service emerge, rarely does the public discover them.  Our corporate media and communications structures are an on-going cancer, a sick disease that we know how to cure but refuse to fix because the general public and those creating the stories that leave us feeling hopeless and cynical actually believe that it must exist this way, to protect their rank and file jobs– jobs created to to keep their jobs at cost of our public health.

Some think that this on-going attack through the emotional onslaught of stories that divide through roller coaster emotional tug of wars between the heart and soul of our global citizenry needs to continue, as if the public wants the stories of ambulance chasing attorneys, road kill celebrations and dead beats who make up only a tiny fraction of what is really going on in the world.

While there are other stories taking place, rarely do they surface to the top of the heap unless they are a considered ratings bonanza, a bonanza that brings in ad dollars that perpetuates this sickness.

“This tool can teach, it can eliminate, yes, and even it can inspire. But they can do so only to the extent that humans are determined to use it to those ends. Otherwise, it’s nothing but wires and lights in a box. There is a great and perhaps decisive battle to be fought against ignorance, tolerance and indifference. This weapon of Television could be useful.”

“He may not be good for America, but he is good for CBS.”

Murrow will always be a journalistic role model. Moonves, a disgraced embarrassment who was recently ousted from the corporation he led, all for the love of ratings.

Ones name need not be Frankenstein to have created a monster.

Existing bureaucracies cannot be reformed but instead must implode like a Supernova whose mass has become too big for its britches.

There are some who wish to reform existing structures. A noble task, but due to the existing rules and regulations and governing principles of these multinational public companies, an impossible one.  Instead of trying to reform the existing sickness, why not cut off the oxygen that gives it financial lifeblood and eliminate the cancer from our systems?

“While the stories of corruption and corporate sickness are essential stories which need to be told, they must not be the only stories that we are exposed to.”

We need to be nourished, fed nutrients that help us to grow and thrive, we need to be inspired and empowered with ways to realize our true potential.

There comes a time when this toxic overload of one or two stories all day long fail to serve and nourish the public.

Due to the elaborate structures of corporate media, journalism schools, colleges and universities as well as many charities, solving the crisis is only a nice story of Kumbaya when, the reality is this:

Their jobs are to keep their jobs.

Despite their rallying cry for a better way of being and serving, they are part of the sickness that perpetuates the onslaught of toxins on society.

Instead of trying to reform what CANNOT BE REFORMED, new structures must be developed and created. And this is our goal, to empower those who wish to develop the ecosystem of service, to come together and build better, together.

For in the words of Arundhati Roy: “Our strategy should not only confront Empire, but lay Siege to it. To shame it. To Market. With our art, our music, our literature, stubbornness, our joy, our Brilliance, our sheer relentlessness… And our ability to tell our own stories. Stories that are different from the ones you’re being brainwashed to believe. The corporate Revolution will collapse if you refuse to buy what they are selling… Their ideas their version of History their Wars and weapons their notion of inevitability. Remember this… We may be many and they be few. They need us more than we need them. Another world is not only possible she is on her way. On a quiet day I can hear her breathing.”

Since we All want our systems to serve us, lets find the way to make it happen.

We are MOBILIZED, at your service.