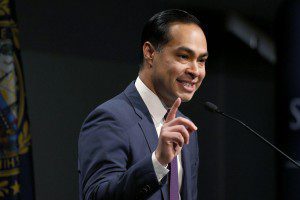 Of all the Democratic candidates who participated in the Democratic primaries, who is the most likely to become President?  My money is on Julian Castro, followed by Kamala Harris and Corey Booker, not in 2020 but in 2028. Why do I say that?  Because they are the most likely candidates to be chosen as a Vice Presidential running mate in 2020 and will therefore inherit the nomination in 2028.
Last night’s debate was an embarrassment for everyone on the stage, a cacophony of muddled voices all talking over one another, mud wrestling for stage dominance, while ripping the flesh from the bones of the front runner, Bernie Sanders.  Shame on them all!
It’s time for the Dems to get real.  Steyer cannot win.  He needs to get out.  Klobuchar is pitiful, constantly bringing up her grandfather, her father, her mother ad nauseum as if they will help her get elected.  Does she really expect mommy and daddy to put her in office?  During the debate, when she continues talking after her time is expired, she is warned, yet she continues on, refusing to give up her mic, revealing only her desperation, not her confidence.
Biden is a stuttering old man, fumbling for his thoughts, confused and unable to think quickly on his feet. Yesterday in another speech he claimed to be running for the U.S. Senate. Biden, like Klobuchar, follows a script prepared in advance.  No matter what the question, they come back to the same-old, tired talking points.  Klobuchar just sounds insincere, Biden confused.  They are acting the part they have been coached into and it’s a bad fit.
Blumberg is a spoiler and is just peeling off votes, but can never win.
Three candidates have the sincerity of their convictions, but only one has the money and the organization to win…. Bernie Sanders. Elizabeth Warren was my choice in 2016, but  she never ran.  I’m quite sure she understood that it was Hillary’s turn and to run would have just split the women’s vote.  She has passion reflected in her ideas and a winning personality, and wisely has chosen not to attack Bernie, but she must realize that a Sanders/Warren ticket will never come to pass.  It’s just too lopsided.  Buttigieg has made the mistake of attacking Bernie forcefully and has poisoned his well.  He’s smart and smooth and he would make an excellent President, but he cannot turn out voters on election day like Bernie.  Bernie has the ground team, thousands of dedicated volunteers, a structure built on the remains of 2016 that can knock on doors and get voters to the polls and polling shows that Bernie dominates in every demographic—over 65, under 35, College Educated, Blue Collar, Black, Latino, Suburban Women.  To attack Bernie is to shoot yourself in the foot, just another desperation move, but with real consequences.  It tills the ground well in advance for the coming Trump onslaught and knocks Mayor Pete out of the running for VP.  Too bad, I would easily have voted for a Sanders/Buttigieg ticket.
So I say the smart candidate was Julian Castro.  He got out early and was not sullied in the ensuing food fights.  He has not attacked any other Democratic candidates and is politically “clean.” He can ameliorate the damage Bernie has endured over the communist subtext inferred by his remarks on Cuba and Venezuela and deliver the Latino vote in Florida and Texas.