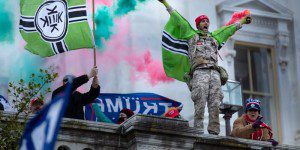 At the close of the second day of the prosecution of Donald J, Trump’s impeachment trial, several GOP senators met behind closed doors with the attorneys for Trump, among them Ted Cruz, Lindsey Graham and the aggrieved, misquoted Mike Lee of Utah.   Previously that day, media reported fifteen empty Republican seats on the floor of the Senate. Taken together these two events might be regarded as clear signs that Republicans on the Senatorial “jury” will deliver a verdict without considering the  evidence and are working hand in hand with the defense to insure a favorable resolution to their collective will.

Fear of Trump reprisals has overwhelmed these “Chicken-Littles,” but the depth of their spinelessness is best understood when looking at the totals of those running for re-election in 2022.  Of the 50 Republican Senators, only 16 seats are at stake in 2022.  34 need have no fear of being primaried. These men fear not only their careers, but their very lives and those of their families for a vote of conscience.  There is ample evidence of the ire of the mob in this regard.

Further codifying that “the fix is in,” the defense team leaked that they plan to wrap it up in a few hours, perhaps as little as three or four, not the allotted sixteen they have been granted. While it can also be interpreted as futile to argue against the overwhelming and irrefutable evidence presented by the impeachment managers, the mendacity of this move is little more than lipstick on a pig for an indefensible position, signaling a corrupt bravado not unlike a mob boss who has bribed and threatened a jury. Considering the imbalance of firepower, a short rebuttal was best.

For all their whining about the need for unity, these short-sighted dullards fail to understand the depth of anger that will permanently lodge in the throats of reasonable Americans witnessing these proceedings and the negative impact it will have on the image of the United States throughout the world, especially with our incredulous democratic allies.  In what other system of justice are witnesses also jurors and permitted to conspire with the defense? In what other system is corruption so openly flagrant?  The very idea of America has become a laughing stock, a perpetual late-night, talk show joke.

But our humiliation does not stop there.  Perhaps the one sad example of unified disparate elements within our society can be readily identified in the diversity of flags carried by the mob of Trump supporters on January 6th, the “patriots,” he called upon to storm the Capitol building to “Stop the steal.”  Trump flags and MAGA flags severely outnumbered the Stars and Stripes, but Civil War Confederate flags waved proudly among and alongside Nazi swastikas, next to the familiar Revolutionary War snake decrying “don’t tread on me,” Jesus flags, “Thin Blue Line” flags, an overwhelming assortment of flags identifying radical fringe elements, and even the flags of Mexico and South Viet Nam, an amalgam of the insane and profane with the holy.  Is this the new “melting pot?”

And what of Trump.  What were his expectations?  What was his endgame? By inviting his supporters to “Stop the Steal” on January 6th, he must have had some idea of just how that might be accomplished.  Only a violent protest held any real possibility for that outcome.

As Impeachment Manager, Representative Neguse summed it up:

Regarding assertion 1: After months of propagating the “Big Lie” and the failure of all other attempts to overturn the 2020 election, there was no other alternative left to Trump but to stop the certification as a remedy.

Regarding 2: There is a long well-documented history of Trump encouraging violence at his rallies, against dissenters and against the press. When flag waving supporters drove a Biden campaign bus off the road, Trump tweeted support. He has expressed his love for violent fringe groups and tweeted support to the armed mob that surrounded the home of Michigan Governor Gretchen Whitmer and threatened to kidnap her.  He has remained silent in the face of the many death threats made against lawmakers and politicians who do not agree with his position regarding the election he regards as fraudulent.

Regarding 3: Did he act willfully as he stood before the mob and directed them up Pennsylvania Avenue to the Capitol. When he was informed of the violence, he was indifferent and ignored the many requests made by those close to him to intervene to stop it.

All we can do is wait and see.  But there is a small glimmer of hope this morning as Nikki Haley breaks with Trump, “He let us down.  We shouldn’t have followed him.”

Get Mobilized and Make Love Go Viral!
Related Topics:impeachmentNikki HaleyTrump
Up Next