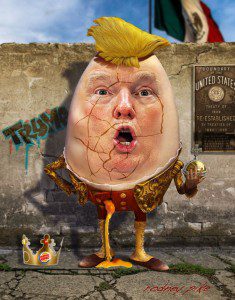 Oh, Joyous Day! Finally, the takedown! Humpty Trumpty has fallen from his wall.

Thank the New York Times, the same New York Times that gave us the Pentagon Papers, that has won over 130 Pulitzers, since established in 1896 the “national newspaper of record,” a name synonymous with integrity, journalistic courage and a commitment to reporting facts substantiated by deep and thorough sourcing and corroboration, and which maintains an undisputed credibility, that is except for one dissenter… Donald Trump.

Donald Trump, the illegitimate father of the birther movement, the fact-checked President who just surpassed 18,000 lies in office, private prosecutor of the “Central Park Five,” the man who punctuates each lie with the phrase “like the world has never seen,” Donald Trump who conspires with those who conspire with Russia, admirer of “strong men” dictators, the man whose secret meetings with Putin remain a mystery and until now, as much a mystery as his taxes, that Donald Trump, the one accusing the New York Times of “fake news,” has fallen from his wall.

Who should we believe?

Yesterday’s news regarding his taxes is only the most recent event in what is promised to become a waterfall of revelations by the Times in the coming days and weeks leading up to the November election.  Trump has managed to withstand all past onslaughts like the true gangster don that he is, by depriving investigators the documents and witnesses that can incriminate him, with support of the GOP, all too willing to sacrifice their integrity for a singular purpose, selling a bill of goods to his base in order to remain in office.  Are there really “good people on both sides?”

Perhaps, it is true that Americans need to be spoon fed their news as entertainment. How else do we account for the rise of Fox News?  You have to stay up late at night to get the entertainment version of opposite views in programming like “The Daily Show,” Last Week Tonight,” “A Late Show with Stephen Colbert,” and “Realtime with Bill Maher,” in order to cobble together some semblance of reality spawned by comic commentary.  Yet despite the many tell-all books by former Trump associates and banished government officials, the many former military leaders who have broken rank to bear witness against their Commander-in-Chief (does anyone fully realize just how serious a breach of protocol this is?) and with all that we have witnessed of Trump in his own words, we still require convincing in the most legalistic of ways, as if his very words were not enough (of course they’re not, he is a proven liar) — prove it.

So it should be no surprise that new historical narrative programming and documentaries are breaking at this time to tell us a more entertaining version of the facts, one digestible by anyone with a cable subscription and a comfortable chair.  Showtime is airing a series called “The Comey Rule” that is very informative.  It takes a dry series of events, otherwise boring, well-worn data and presents it in a dramatic way to hold our attention.  Who would have thought that watching a bunch of government officials sitting around conference room tables or across their desks could be so compelling.  Watching it, I learned the story behind the news that I thought I knew, a definite must-see.

Also, most notable is the two-part HBO documentary, “Agents of Chaos” that dissects in minute detail the many intertwined strands of the Trump/Russia relationship, well at least the known ones, another must-see.

But these morsels are just appetizers to the Tuesday debate with Biden.  Never have so many people waited with such anticipation to see their President humiliated and caught in his own web of deceit.  Something tells me we are witnessing the rainstorm that will propel an electoral landslide in November, “like the world has never seen.”

Get Mobilized and Make Love Go Viral!
Related Topics:New York TimesTaxesTrump
Up Next