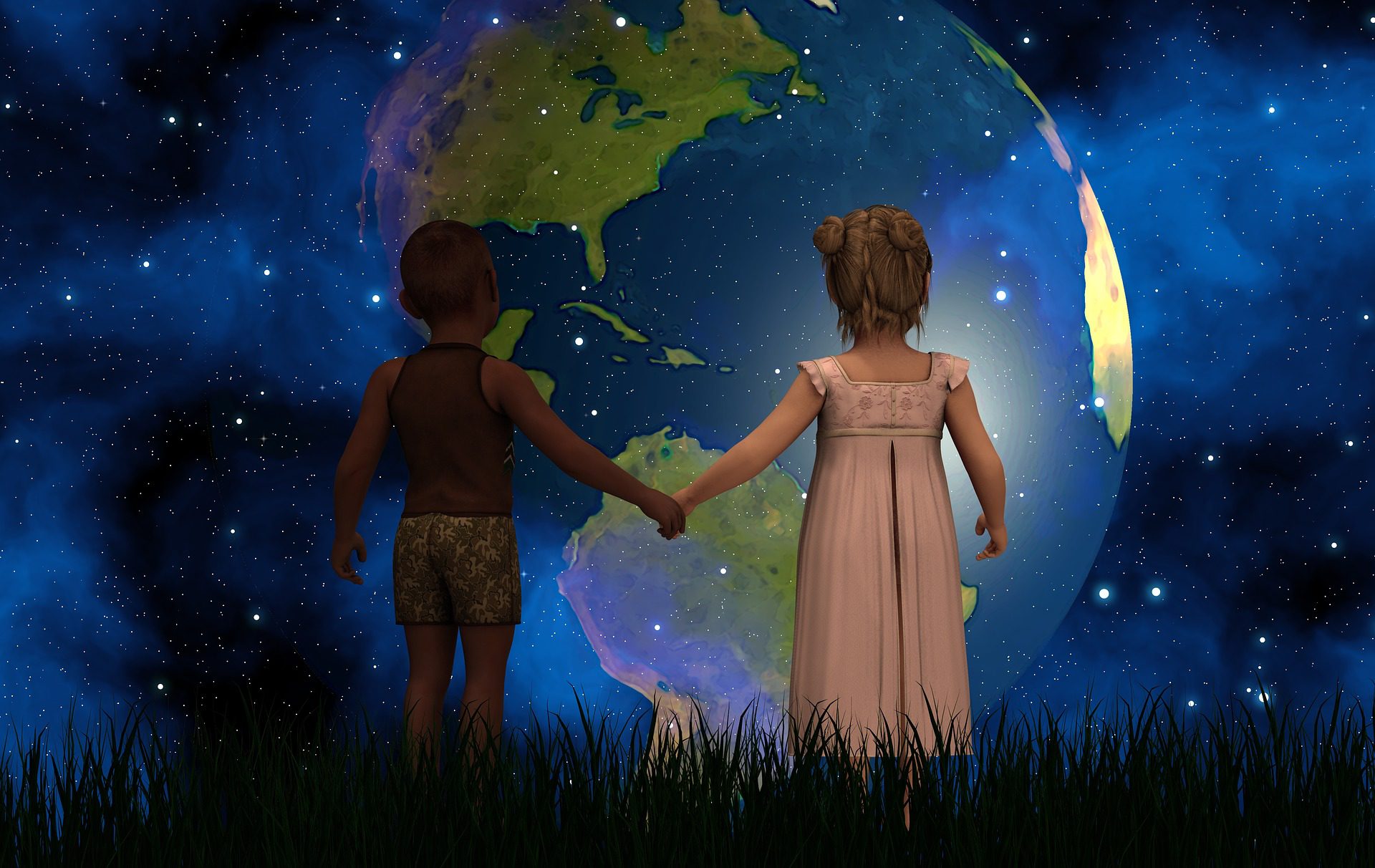 We all care about ending world hunger. We all care about climate change. And we tend to demonstrate this care by contributing to solving them — by reducing our consumption, or perhaps by donating to causes we believe in. Our empathy guides our actions — we want the world to be fairer and better, not only for ourselves but for others as well.

But the dominant narratives surrounding these problems often weaponize these very emotions to overemphasize individual responsibility. This shifts the focus away from their root causes — the vast and unjust overconsumption of the corporate elite in their quest for ever-growing profits.

The typical conversation about climate change focuses on consumption — mostly that of individuals. We’re told we have to reduce our energy use, consume the ‘right’ products, recycle more, drive less, and have fewer children.

The conversation about food is even worse. Articles, reports, and studies about agriculture are likely to contain some version of the following sentiment: “The population is expected to grow to almost 10 billion people by 2050. We must double food production in order to meet demand without hiking up prices. How are we going to produce enough food to feed all of these people without destroying the planet?”

Increasing food production to meet the demands of a growing population is presented as the ultimate conundrum. Proposed solutions are predominantly centered on increased reliance on technologies to maximize yields and feed ‘all of these hungry people’ as the population grows, accelerating at a seemingly unstoppable rate. Whatever new technologies or techniques are introduced, they are, first and foremost, measured along the metric of increasing yield.

This narrative isn’t just misguided — it depoliticizes the problem, shifting blame in a dangerous way.

The reality is that we have enough food on the planet to feed every human being a calorically complete and healthy diet. Contrary to popular belief, hunger is most often caused not by a lack of food but by a lack of access. With the amount of food we produce today, we could feed the highest population prediction of 10 billion people by 2050 — today.

This has much more to do with economic inequality than anything to do with population. The people who cannot afford food are most often the people involved in growing it. The vast majority of the world’s impoverished people, most of whom live in rural areas, are involved in agriculture. This seems counterintuitive, but many farmers worldwide are net food buyers, meaning they do not subsist on the food they grow, they sell their crops and use that money to buy food for their families.

When prices for crops are too low to offset input prices, when farmers face barriers to accessing markets or credit, or they are forced into exploitative contracts or other arrangements, farmers do not have adequate funds to purchase food for themselves and their families. This is the result of the long process of industrialization that has displaced millions of rural people and removed them from their traditional agricultural practices, replacing polycultures with monocultures.

Perhaps the other most damning piece of evidence to counter the narrative that we must ramp up production to end hunger is that some cities have already ended it — without increasing yield. Belo Horizonte, one of the largest cities in Brazil, managed to virtually eliminate hunger through a network of policies addressing different facets of the issue. They expanded school meal programs; partnered with local small farmers to deliver produce to underserved parts of the city at fixed prices for staples; created subsidized restaurants where people could eat affordable, dignified meals, and a host of other policies. It never took more than 2 percent of their annual budget, and the whole transition took less than 10 years. It didn’t require corporations ‘innovating’ or developing expensive technologies. It required political will, the strengthening of governance systems, declaring food as a right of citizenship, and correcting for hunger as a market failure.

We are choosing not to end hunger. Presenting it otherwise obscures the fact that it is, at its core, a matter of political will — not a matter of ability.

In the climate change debate, we see a similar narrative around overpopulation: politicians — and even supposedly progressive conservationists like David Attenborough and Jane Goodall — critique high birth rates and overpopulation for exacerbating climate change. This fails to take into account that 10% of the world’s population is responsible for at least 50 percent of the entire world’s carbon emissions. On the corporate side, only one hundred companies are responsible for 71 percent of carbon emissions. This rampant inequality is only getting worse: during the start of the COVID-19 pandemic between March and December 2020, billionaires’ wealth increased by $3.9 trillion. In the same period, the ​​number of people subsisting on less than $5.50 per day increased as much as 500 million. The degree of inequality is quite literally unimaginable.

And although it’s not always explicitly stated, there are always certain populations that are growing ‘too quickly’ and having ‘too many children,’ and it’s not from the elite group of overconsumers. It’s referring to Black and Brown populations in the Majority World. This narrative has given rise to highly problematic ecofacist and eugenic discourses within climate change, even spilling over into tragedies like mass sterilization programs. These are the populations who suffer the most from the effects of climate change, and simultaneously contribute the least to the problem.

When we call someone voiceless, for example, or talk about “giving someone a voice,” the onus is placed subconsciously on them for failing to be heard. But when we call them silenced, our attention goes to the perpetrator — we immediately ask who is silencing them. It’s the same vital shift from calling people ‘slaves’ to identifying them as ‘enslaved,’ which places the onus on those doing the enslaving, rather than attaching the identity to the person themselves.

The narratives around climate change and agriculture need the same reframing. The way you define a problem guides the arc of the solution. When population is centered as the core of the challenge, the blame is subtly placed on the masses for ‘consuming too much.’ It’s always “We must feed the world” and “We must end climate change,” as if these problems simply arose with no intentional perpetration, and that we must all valiantly come together to solve them because we are all implicated in creating them. This is wrong. It’s a new form of climate denial; since outright denial has become a politically untenable position, corporations shift the blame onto individuals — onto us.

This move is especially insidious because it capitalizes on the inherent care that people have for others, the fact that they want to ‘do the right thing,’ feel guilty about the suffering of others and want to make a difference. It’s almost too easy to convince people that they are the problem and keep them constantly trying to live more sustainably, and feeling guilty if they fall short. Even worse, this makes us prone to judging those who can’t afford to access ‘sustainable’ alternatives, as if that were the problem and not the consolidation of corporate power that caused this lack of access to begin with.

Complicity in this unjust system does not come primarily from choices around consumption. It comes from failing to challenge the underlying power structures. This is not to say that individual consumption plays no part in the issue; it’s to remind us to be wary of those who weaponize that guilt and direct attention away from the root causes. Why are we continuing to shame ourselves, implicate ourselves, when we are all doing the best we can with the resources and knowledge that we have, while corporations knowingly prey on these emotions to continue amassing wealth at all of our expense?

This guilt, this feeling of complicity from ‘consuming too much’ is misdirected energy that could be used for mass mobilization, a tactic far more likely to address the power structures that got us here in the first place. And by standing alongside those already fighting to address inequality around the world, we stand a chance to actually achieve the sustainability we’re trying to build.

Let us be clear: the problem does not lie in the masses. The solution does.

It’s time to push back against world leaders and corporate actors joining hands and promising that “We will end climate change, together.” No. First, we must get angry. And then we must flip the script back onto these powerful actors. You will stop looting the rest of the world. You will stop prioritizing wealth accumulation over human life. You will stop extracting the last of our resources. You will clean up your mess.

And we will stop at nothing until you do.