A life-long activist who speaks, writes and organizes widely on energy, the environment, US and global history, drug war, election protection and grassroots politics.

He taught (2004-2017) US history and western civilization, cultural and ethnic diversity, ecological history and globalization at Capital University and Columbus State Community College in central Ohio; and history, journalism and the Occultural Revolution at Hampshire College, Amherst, MA (1973-5). 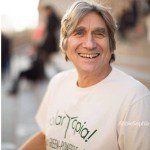 In 1962 Harvey marched de-segregate a roller rink in Columbus; met Dr. Martin Luther King on the Meredith March for civil rights in Grenada, Mississippi, in 1966.
As a student editor at the University of Michigan Daily, his 1966 editorial “The Use of Marijuana: It Should be Legal” went viral on the UPI’s global wire.

Harvey marched on the Pentagon in 1967, the Chicago Democratic Convention in 1968, and  helped found the anti-war Liberation News Service (1967) and the communal organic Montague Farm in Massachusetts, a pioneer in a new generation’s movement against chemical farming (1968-2003).

In 1972 HARVEY WASSERMAN’S HISTORY OF THE U.S., introduced by Howard Zinn, published by Harper & Row, helped pioneer a new generation of people’s histories.

In 1990 he became Senior Advisor to Greenpeace USA, for whom he spoke to 350,000 semi-conscious rock fans at Woodstock 2 (1994). In Kiev (1996) he spoke at the tenth anniversary commemoration of the Chernobyl disaster, and then in Kaliningrad, in the former Soviet Union, where he met with “liquidators” whose lives and health had been sacrificed in the Chernobyl clean-up.

In central Ohio, Harvey co-founded the Great Blue Heron Alliance, which saved 240 acres of land for a wildlife refuge, and grassroots campaigns that shut a trash-burning power plant, stopped a regional radioactive waste dump, shut a McDonald’s and saved the city of Bexley’s Jeffrey Park.

Harvey and Bob Fitrakis broke many of the major stories on the theft of the 2004 presidential election in Ohio, and were called “the Woodward and Bernstein” of election protection by Rev. Jackson Jackson.  They’ve since published numerous more books and articles on the strip & flip disaster of Ameica’s stolen elections.

With Bonnie Raitt, Jackson Browne and Graham Nash, Harvey helped form NukeFree.org  which (2007) helped stop $50 billion in new reactor loan guarantees.   On March 11, 2011, Harvey was among the first to go viral on the internet with news of the Fukushima disaster.  He helped campaign for the successful shut-down of California’s San Onofre nuke plant, and continues to campaign for the shut-down of Dablo Canyon, California’s last reactors.  He currently lives & works in Los Angeles.