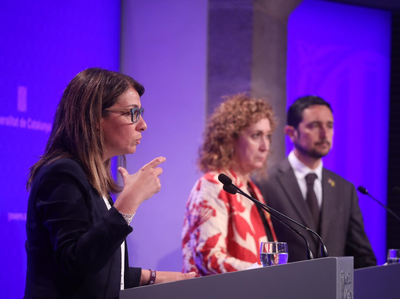 The Catalan government has approved the 2019–22 Master Plan for Development Cooperation, which envisages a progressive increase in investment in this area to reach 0.7% in 2030. The Plan is based on an objective stated in Law 26/2001, which provided for 0.7% of current revenue that is not conditional on official development assistance (ODA) to be allocated to development cooperation. It is estimated that this would amount to €261.71 million in 2030. To achieve this goal, the Executive plans to increase spending in this area by €20.82 million a year in 2020, 2021 and 2022, as budgetary resources allow, and has pencilled in further increases to work towards the 2030 objective.
The 0.7% commitment to development cooperation is one of the key points in the 2019–22 Master Plan, which reflects the Catalan government’s determination to adopt and deploy the 2030 Agenda and its Sustainable Development Goals (SDGs). Adopted by the General Assembly of the United Nations in 2015, the SDGs represent a major milestone for public policy, particularly in the area of development. The Plan also maintains the focus on gender issues and defence of human rights that is central to Catalan development cooperation.
Taking into account the increased budget for development aid, the 2019–22 Master Plan defines a series of priorities for development projects, which translate into seven strategic objectives aligned with the 2030 vision and the SDGs. The first three focus on defence, safeguarding and exercise of human rights; the fourth, on promotion of environmental sustainability and the fight against climate change; the fifth, on promotion of democratic governance; the sixth, on the culture of peace; and the seventh, on global development challenges, with particular emphasis on inequalities and migration.
The Plan also identifies priority countries and peoples, areas for special attention, and especially vulnerable areas and groups. Areas that will be the main focus of efforts over the next four years include the Mediterranean region, Africa and Latin America.
The Plan reflects a firm commitment on the part of the Catalan government to make education for critical citizenship more central to its development cooperation policy and continue working to use education more broadly as a tool for strengthening public commitment to human rights, justice and peace. In line with this goal, the Executive undertakes to allocate at least 25% of its official development assistance resources to this area during the period covered by the Master Plan.
National vision
The Master Plan articulates a national vision of development and cooperation policy. Catalonia is committed to helping create a world that is freer and more just, egalitarian, sustainable, equitable and peaceful, where human rights are respected, protected and guaranteed. This core idea also emerged from “Vision 2030: The Catalan Contribution to Global Development”, a participatory process launched by the Directorate-General for Cooperation in collaboration with the Secretariat for Transparency and Open Government. The document that has been approved reflects a process of discussion and debate that took place over three months. Participants included a wide range of development cooperation actors, others not traditionally involved in the sector, and recipients of Catalan development cooperation assistance. The participatory process gathered input from 23 face-to-face sessions, 20 of which were self-managed (including sessions organised in Morocco, Mozambique and Colombia), as well as contributions via the web, with a total of 500 participants.
In line with the Catalan government’s commitment to transparency, it is anticipated that in June participants will be sent a report explaining the choices about which proposals to incorporate in the Master Plan. Achieving a consensus in the cooperation sector and among actors involved in global development took a significant effort. This consensus played an important role in facilitating the development of the new plan.
The 2019–22 Master Plan reflects the government’s determination to work towards cohesive public policy that links all of the Executive’s activity (including actions taken within Catalonia ) to sustainable development, with the Sustainable Development Goals as an overarching international framework. It will now be sent to Parliament for approval.
Source: Catalonia