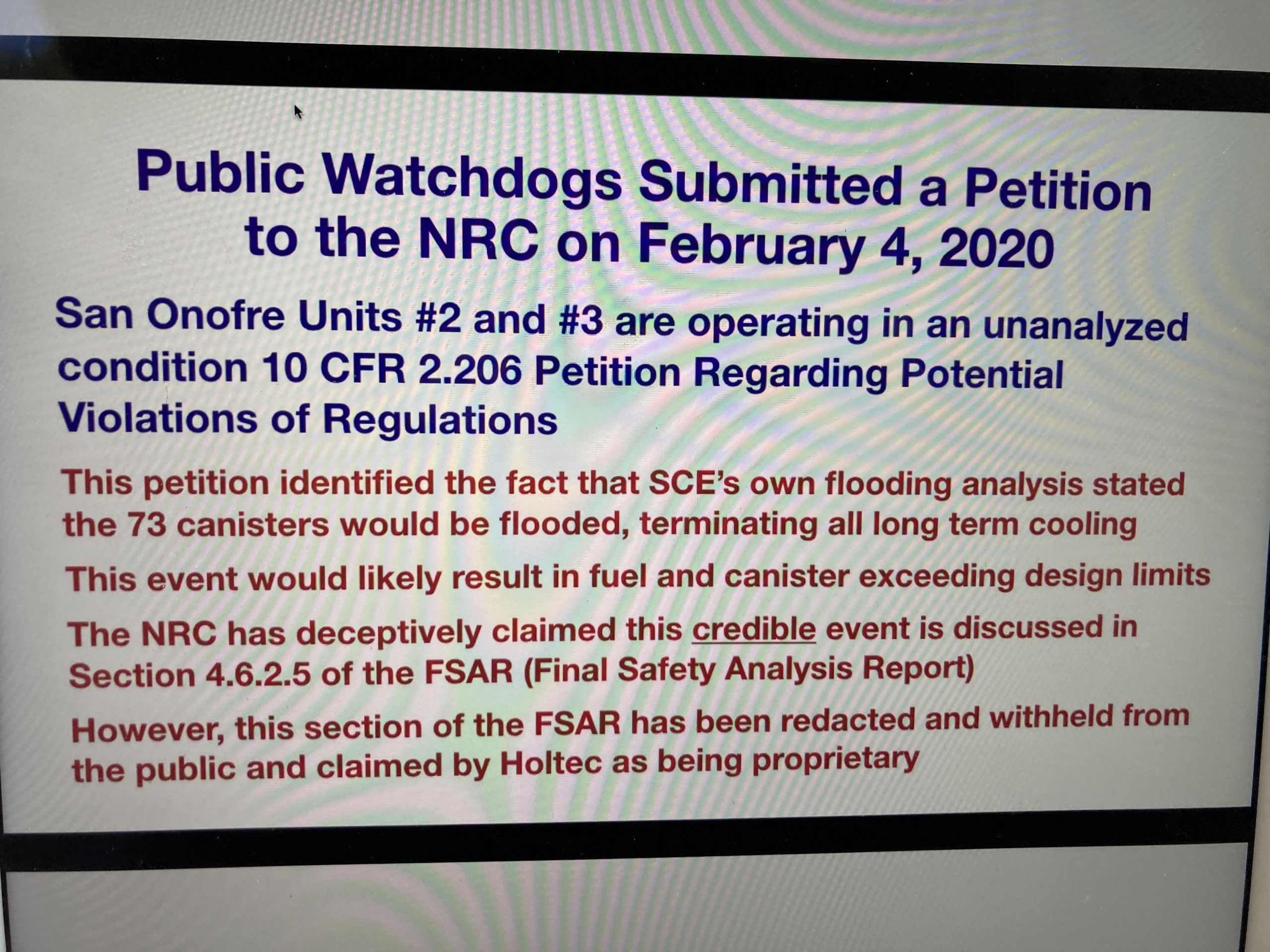 The Big Picture: March 11, 2011 was the date when the “not credible” destruction of a key part of Fukushima Daiichi power plant suddenly became very credible indeed, due to a massive earthquake.  The land for many kilometers around had to be evacuated.  Now it’s 10 years later.  Billions have been spent, whole towns are still deserted, and all they have to show for it are some hardy robots and… no long term plan to clean up the waste.  We’ve seen 10 years of band-aids slapped on a problem that could last a millenia.  Ugh.

For The Record: Look, there is no TECHNICAL problem with nukes.  The science really is settled, and there really do exist safe ways to handle nuclear power.  None of them are even remotely affordable, profitable, or can be trusted to be managed by the stupid, stupid people who run them.  That’s the core of the problem: the people involved.  See for example Texas, just a few weeks ago, when their nuke-u-ler power industry, managed by the best and brightest, with all the latest bells and whistles of technology, was entirely defeated in 2 days flat by… snow.  By SNOW.  They had no plan for snow, falling from the sky.

These are the same people who tell us they have plans for the safe storage of waste that will protect human, plant, and animal life for the next several thousand years.  Riiiiiigghhht!   I so want to believe them.  I do.  But Davis Besse happened, right where I grew up.  It was “not credible” that a reactor made from 6” of thick steel could be breached.  Then it happened.  Three Mile Island happened, 2 states away.  And I watched on TeeVee as the entire eastern seaboard lost its’ damn mind, until the reactor mess was stopped in barely the nick of time.  On and on… over and over.  Everywhere on the planet where there are nuke plants, there are cost overruns, optimistic promises, folly, near misses; and disasters.

Enough.  We’ve had 8 decades of BS now.  It’s time to admit that there is no future for this technology, at any price point.

The real point of this posting isn’t so much about the Fukushima tragedy, though it was a damn shame.  It’s about how right here at home, we have so many plants and so much waste with no idea about how to manage their after-effects for the long term.  It’s simply not fair for example, that people who are not yet born, will be paying to de-commission the Diablo Canyon nuke plant 3 generations from now.  But that’s the deal our venal and corrupt politicians have set up for SoCal residents.

Speaking of Southern California, how many of my readers there are aware that you reside near 73 possible Chernobyl-sized explosions?  The odds are not huge that they might pop off, but are far from zero.  And as time goes on, within your lifetime, the odds go up to nearly 100%.  I’ll post some slides here from the group Public Watchdogs to help clarify why you should give a sh** about this pending disaster.  And why the NRC, and plant operators are acting with the same arrogance, hubris, and incompetence as the leaders at Fukushima right up until the day the earthquake exposed them as the fools they really were.  Their foolish choices practically guarantee a terrible outcome for you and yours.  It’s high time to bring this industry to heel, starting with the failed plant at San Onofre, (aka SONGS).

Credit for the data below goes to Public Watchdogs, a salty bunch of hippy enviro-tree huggers, such as Stuart Scott, Paul Blanch, and Charles Langley.  Oh wait, none of them are hippies, this group just happens to be made up entirely of folks that made their careers in Nuclear Power and became whistleblowers out of disgust and anger.  Some of them wrote the very rules the NRC is now breaking.  Huh.

It is exactly because of Climate Change and sea level rise that I am opposed to nukes.  Anybody who tells you that nuke plants are the only solution to our petroleum addiction is lying to you.  Most all plants are built just like San Onofre – – right next to a body of water.  Those same plants are now all imperiled by rising waters, but every current model tosses out any rosy scenarios.  The only credible scenarios on the table now show our coastal areas hit and hit hard, within a decade or so.  It’s no longer a theoretical problem, no longer a can we could just kick down the road for our heirs.  The risk is real and effectively could happen tomorrow.  Given how long it takes to get bureaucrats to change course, it’s practically too late already for San Onofre.

73 grain silo-sized tubes of waste sit, about 100’-0” from the ocean shore, ready to blow at any time.  The folks in charge say it’s “not credible” that they could fail, but we’ve heard that nonsense before, haven’t we?  Their system depends on helium staying sealed in the tubes, but has no way to check or refill them if it leaks.  You know, Helium, the 2nd lightest atom, one known for its famous property of staying close to the ground…

Their backup plan relies on air circulating around the tubes.  Which is a great plan, until those tubes are flooded out, and those same air ducts become plumbing.  Heck, even then, they say, no problem!  There’s a wall!  (That wall is merely 10’-0” high).  If water comes in, then the mud will act as an insulator.  They don’t mention that there will be no way to then even access, let alone test the tubes for safety if that happens.  This is the part where I remind readers that *each* tube has more radioactive Cesium in them than what Chernobyl released.  So if the worst happens in SoCal, (an earthquake or tsunami waves),  and you happen to survive them, don’t sit around patting yourself on the back.  Get the heck out of dodge, because ole’ SONGS will be about to sing it’s swan song.  And that’s one finale you don’t want to experience. 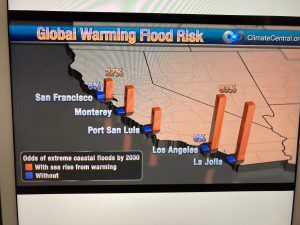 The SONGS plant is located midway between LA and La Jolla, CA 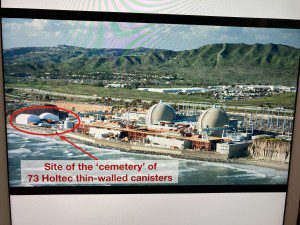 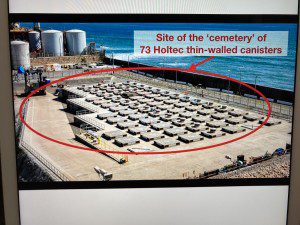 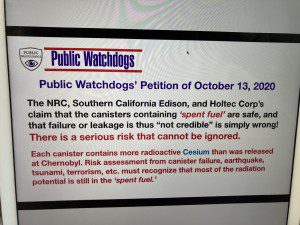 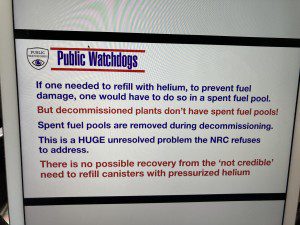 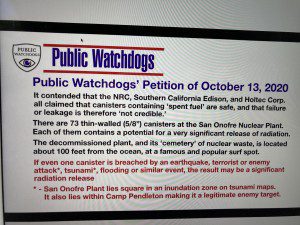 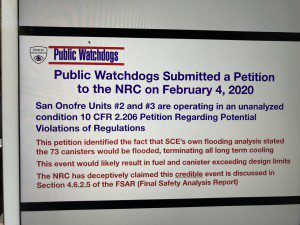 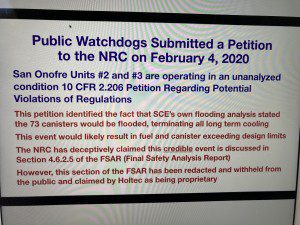 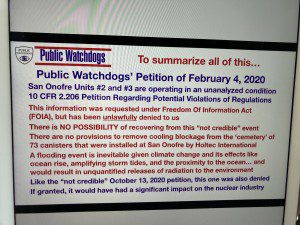