From Uprising to Upwising: Evolution of Revolution

How Cooperatives are the Future

Transforming from Globalization to Localization

Healing the Sick Society: Prevention as the Best Medicine

Breakthroughs in New Edge Science and Holistic Management : Perfect Together

A Smarter Conversation with Author and Biodiversity Activist Vandana Shiva 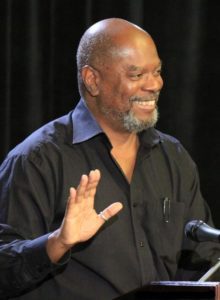 The Evolution of Revolution

A Smarter Conversation with Shariff Abdullah, Director of the Commonway Institute

More than fifty years ago, when I was a freshman teacher in inner city Washington, D.C. I got to watch the explosion of outrage, the rioting and the looting after Martin Luther King was killed. Tanks and troops lined the streets and there was a curfew for days, until the festering rage died down. When school resumed, my students generously offered me TV sets that they had looted. No charge for me. I was a popular teacher. I had no use for TV in those days, so I politely declined.

And so here we are half a century later, and exactly what has changed?

Well we had a President of Color for eight years, but did that actually matter to real black lives? And while it’s a breakthrough indeed that white folks are getting an earful about what it means to be Black in America – and perhaps police brutality will get addressed in a meaningful way – this is all out of the Democratic Party identity politics playbook. The conversation remains of the “us vs. them” battlefield. Will “defunding” the police make any difference? Or does it make more sense to redefine “policing” and who and what is being protected?

There are two things that Martin Luther King learned and emphasized as his work deepened, things that probably hastened his removal from the scene – the war machine, and economic injustice. Said Dr. King:

“A nation that continues year after year to spend more money on military defense than on programs of social uplift is approaching spiritual doom.”

Well … here we are. If hearing the phrase “President Trump” doesn’t spell spiritual doom, then I guess there is a deeper bottom we still have to hit.

All this means we need to seize the moment as a time to hit “reset” and have a “smarter conversation” about what we would like instead, and how we can get there. That’s why I’m thrilled to have as my guest on Smarter Conversations on Mobilized this week, Shariff Abdullah. Shariff is a consultant, speaker, author and advocate for societal transformation.   His mission is to bring currently dysfunctional systems and structures into alignment with our common human and spiritual values, to create a world that works for all living things.

He consults with people and organizations on the leading edge of change, including government agencies, businesses and social service organizations. As Director of Commonway Institute, he has visited over 43 countries and over 100 distinct cultures, giving him a unique perspective on our global human and spiritual issues, and a vision that spans culture and class.  He has proven experience in working with all peoples and in many different situations, bringing harmony in conditions of actual or potential conflict and discord.

His books on leadership and societal change include the award-winning Creating a World That Works for All, and Seven Seeds for a New Society.

The focus of the conversation is on transforming police culture, and we will also touch on how we move past divisive identity issues and address the “identical” issues all humans face – creating a world that works for each and all.

You can Zoom in live at 11 am PT / 2 pm ET this Saturday, June 13th and ask questions via our chat box. Or, you can listen later. Either way, this conversation will point us toward the deeper causes and more enduring solutions.

Please take a moment to view this 5 minute video, a summary of the work of Shariff Abdullah and Commonway.