Enforceable Rights of Nature Events in Your Community

Join us on   Streamyard Studio    Join us on FB Live

On Community Civil Disobedience in the Name of Sustainability: The Community Rights Movement in the United States (e-Book) 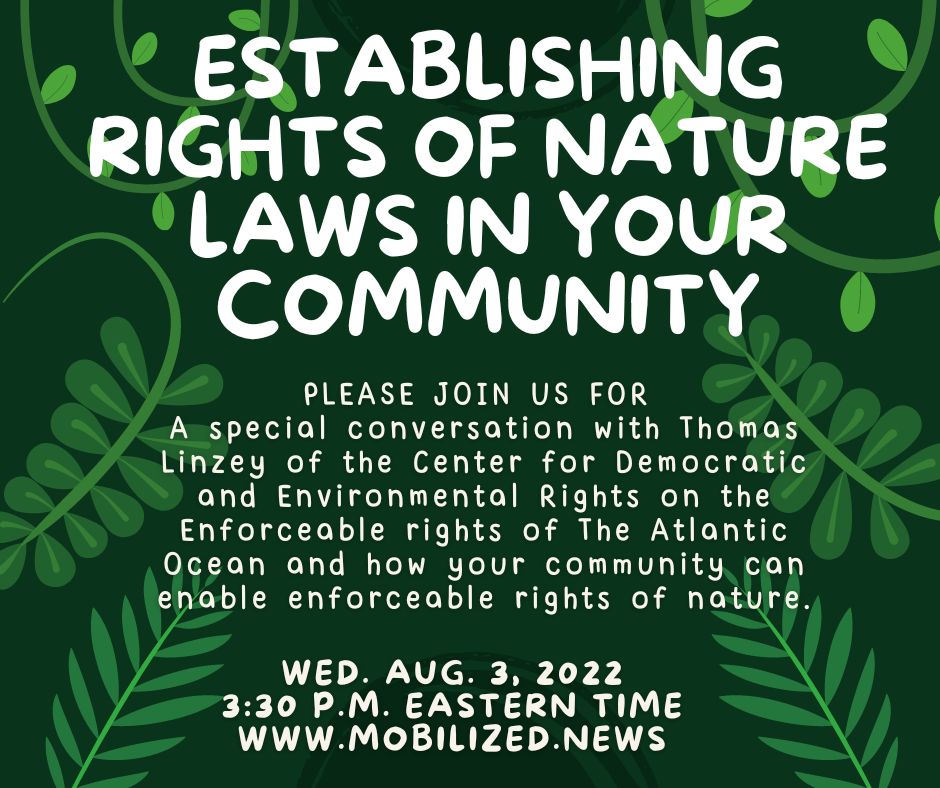 On August 2nd, A legal framework for combating the threats of climate change to Newfoundland is being introduced.  These legal frameworks are emerging in communities worldwide.

On August 3rd at

You’re invited to a front row seat in an essential conversation  on how you can to bring in enforceable rights of nature laws in your community.

PLEASE JOIN US VIRTUALLY   for a conversation with Thomas Linzey and Patricia Johnson-Castle, who is a Nunatsiavummiuk, from Newfoundland’s Social Justice Cooperative (SJC)” on the launch of a “Rights of the Atlantic Ocean” campaign in St. John’s, Newfoundland.  This is a virtual media experience recorded for broadcast.

What you will learn and experience during this conversation.

Who is this for?

As the corporate world continues to play tug of war with our public health systems, millions of people worldwide refuse to sit on the sidelines as leadership everywhere continues to plunder the planet’s natural resources for their myopic, short-term gain. And real power is in the hands of the people.

If we cannot create the changes we want within the existing systems, communities worldwide must create the real system changes through cooperation and collaboration. Creating a better tomorrow, today, is not a proprietary. It serves all of us.

Right now, people within the community rights movement aren’t waiting for power brokers to fix the system. They’re beginning to envision a new sustainability constitution by adopting new laws at the local level that are forcing those ideas upward into the state and national ones.

In doing so, they are directly challenging the basic operating system of this country—one which currently elevates corporate “rights” above the rights of people, nature, and their communities—and changing it into one which recognizes a right to local, community self-government that cannot be overridden by corporations, or by governments wielded by corporate interests.”

A well-informed public is the most powerful natural resource of all.

What if, by working together, we could find and harness the wisdom and knowledge to restore health and well-being to our planet so that we, the people of the world, can have a healthier coExistence? It is time to amplify their stories so people everywhere can bring them to life where they live and work. 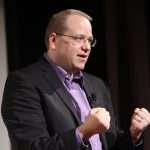 Thomas Linzey serves as Senior Legal Counsel for the Center for Democratic and Environmental Rights (CDER). He is the co-founder of the Community Environmental Legal Defense Fund, and is widely recognized as the founder of the contemporary ‘community rights’ movement which has resulted in the adoption of hundreds of municipal laws across the United States. He also sits on the Board of Advisors of the New Earth Foundation.

Linzey is a graduate of Widener Law School and a three-time recipient of the law school’s public interest law award. He has been a finalist for the Ford Foundation’s Leadership for a Changing World Award, and is a recipient of the Pennsylvania Farmers Union’s Golden Triangle Legislative Award. He is licensed to practice law in Pennsylvania, and is admitted to practice in the U.S. Supreme Court, the Third, Fourth, Eighth, and Tenth Circuit Courts of Appeals, and the U.S. District Court for the Western and Middle Districts of Pennsylvania.

Linzey is the author of Be The Change: How to Get What You Want in Your Community (Gibbs-Smith 2009), the author of On Community Civil Disobedience in the Name of Sustainability (PM Press 2016), and the co-author of We the People: Stories from the Community Rights Movement in the United States (PM Press 2016). He was a co-host of Democracy Matters, a syndicated public affairs radio show broadcast from KYRS in Spokane, Washington. He was featured in Leonardo DiCaprio and Tree Media’s film 11th Hour and We the People 2.0 (Official Selection of the Seattle International Film Festival), assisted the Ecuadorian constitutional assembly in 2008 to adopt the world’s first constitution recognizing the independently enforceable Rights of Nature, and is a frequent lecturer at conferences across the country.

Linzey’s work has been featured widely, including in the New York Times, the Los Angeles Times, Mother Jones, and the Nation magazine. In 2007, he was named one of Forbes Magazine’s “Top Ten Revolutionaries,” and he was named one of the top 400 environmentalists of the last 200 years in the two-volume encyclopedia, American Environmental Leaders (3rd Ed. Grey House Publishing 2018). He is currently working on a new book, ‘Modern American Democracy (and other fairy tales)’ . 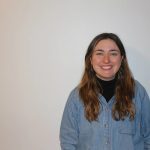 Patricia Johnson-Castle is Nunatsiavummiuk (Inuk from Nunatsiavut), as well as of British and German descent. Her grandmother, Julia, was a Tishialuk girl. Patricia grew up as a townie but has been living in Nain, Nunatsiavut for 2 years. Living outside the overpass in her ancestral home was pivotal in gaining a fuller understanding of the dynamics of oppression that are maintained in this Province from the erasure and isolation of Indigenous communities to the consequences of intergenerational wealth of the merchant fisheries system. A better Province is possible, we have the power, we just have to use it. 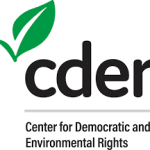 About The Center for Democratic and Environmental Rights – CDER

Based in Spokane, Washington, the Centre for Democratic and Environmental Rights (CDER) aims to shift how we relate to nature. With increasing environmental crises, CDER calls on us to change our ways of governance as we focus on the protection of human and natural communities. CDER works with grass roots organizations such as SJCNL to protect our rights to a healthy environment, and to protect the rights of nature itself. Since governments and corporations often thwart the efforts of environmental protectors, CDER calls on all of us to strengthen our democratic rights so that we have the authority to protect nature.

Since 2006, CDER has partnered with communities, countries, and tribal nations to establish laws to recognize and protect the legal rights of nature. As their mission gains momentum, for the first time, nature has legal rights in several locations globally; people can defend these rights on behalf of the World.

Climate Action Newfoundland & Labrador (CANL) is a group within the Social Justice Co-op who stands for a livable planet and fights for the future by reconnecting people with nature, fostering community building and innovating solutions for taking immediate action to stop climate change.

(!) It’s [ CODE: RED ] for Newfoundland & Labrador and all of humanity. People and the planet are under threat. Canada declared a National Climate Emergency June 17, 2019, and the city of St. John’s, NL declared a Climate Emergency November, 4, 2019 …as Canada continues to warm at over twice the global rate, with an over 7°C increase projected for parts of Newfoundland & Labrador by 2050 (compared to 2000).

“Global heating is affecting every region on Earth, with many of the changes becoming irreversible.” ~United Nations, August 9, 2021

Good news is:
> It’s possible to avoid the worse affects of climate change and build a better future for Newfoundland & Labrador – with it being extremely important people stay informed about environmental problems and act now to fix them. YOU are the #1 solution to climate change.

In that spirit, we are currently working on a number of new initiatives, including development of a NL Climate Leadership Program, various Climate Projects (like the Atlantic Ocean Bill of Rights), and a Climate Library & Resources for helping us all work together. So stay tuned!

For the ❤️ of Nfld & Lab. ‘Be a Force for Nature’ …because there is NO 2nd Newfoundland & Labrador. Join us and take action today! We meet Wednesdays, 7 pm NST / 6:30 AST – Zoom link on the SJC Calendar. 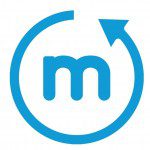 Mobilized is a leading experiential multimedia network focusing on real worldwide solutions, not for 2030, not for 2050, Now! Our flagship TV series Mobilized News appears on Free Speech TV several times weekly as well as Streaming on Demand.

A weekly series produced by Steven Jay and hosted by Jeff Van Treese, Mobilized takes a deep look at our world, the consequences of human activity on our planet, and how we can reverse and prevent existing and future crises from occurring. Mobilized reveals life on our planet as a system of systems which all work together for the optimal health of the whole. The show delves into deep conversations with change-makers so people can clearly take concerted actions. 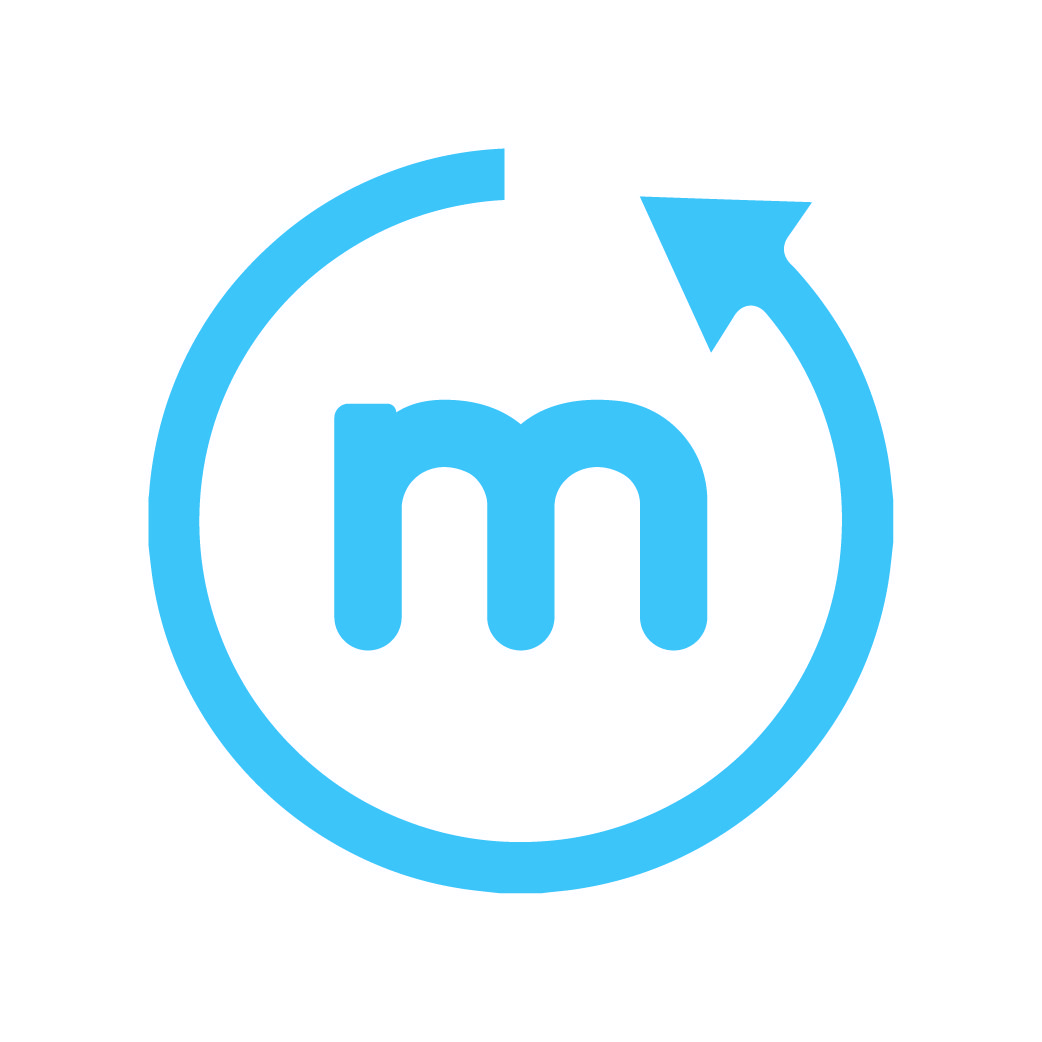 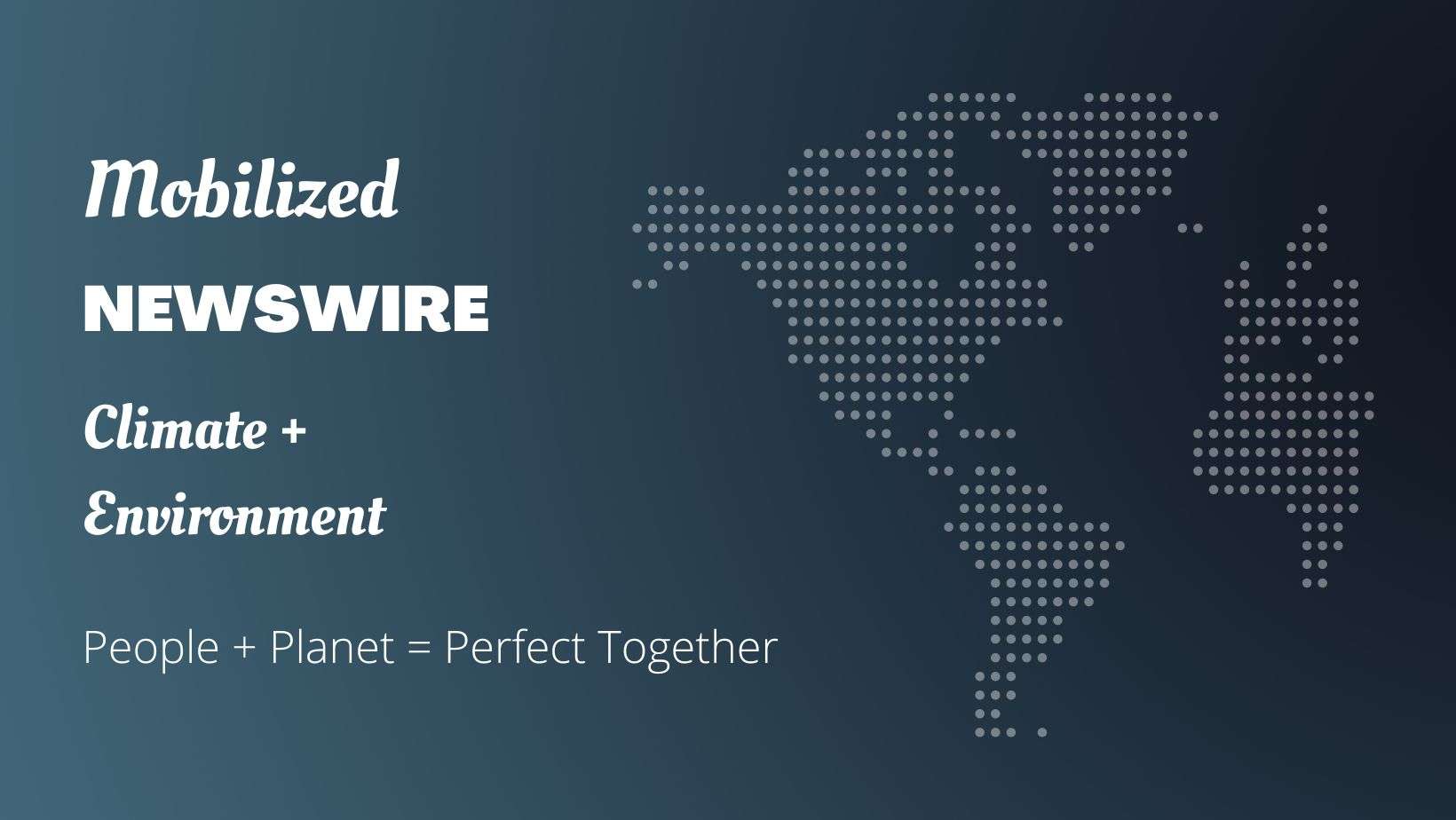 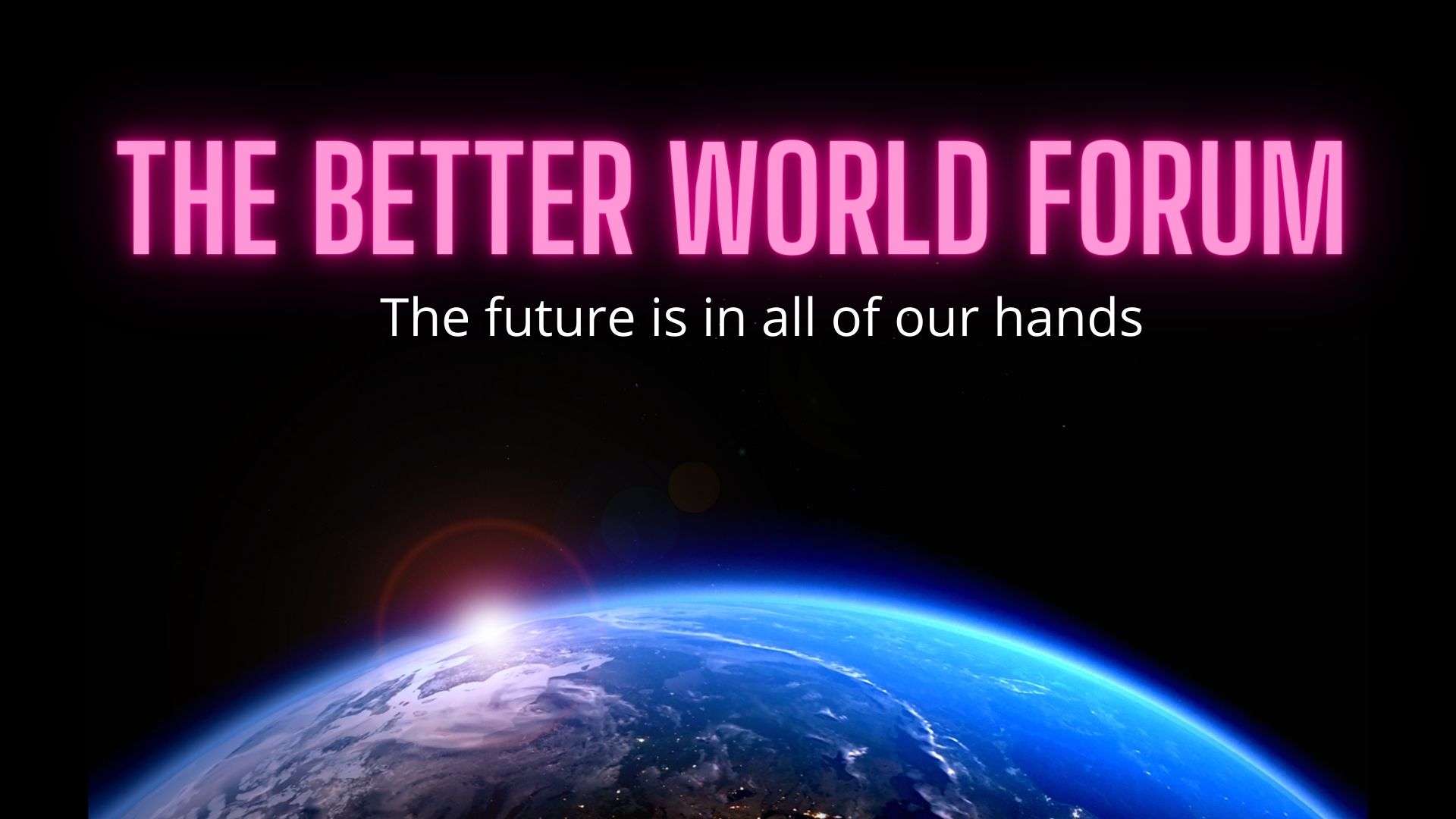 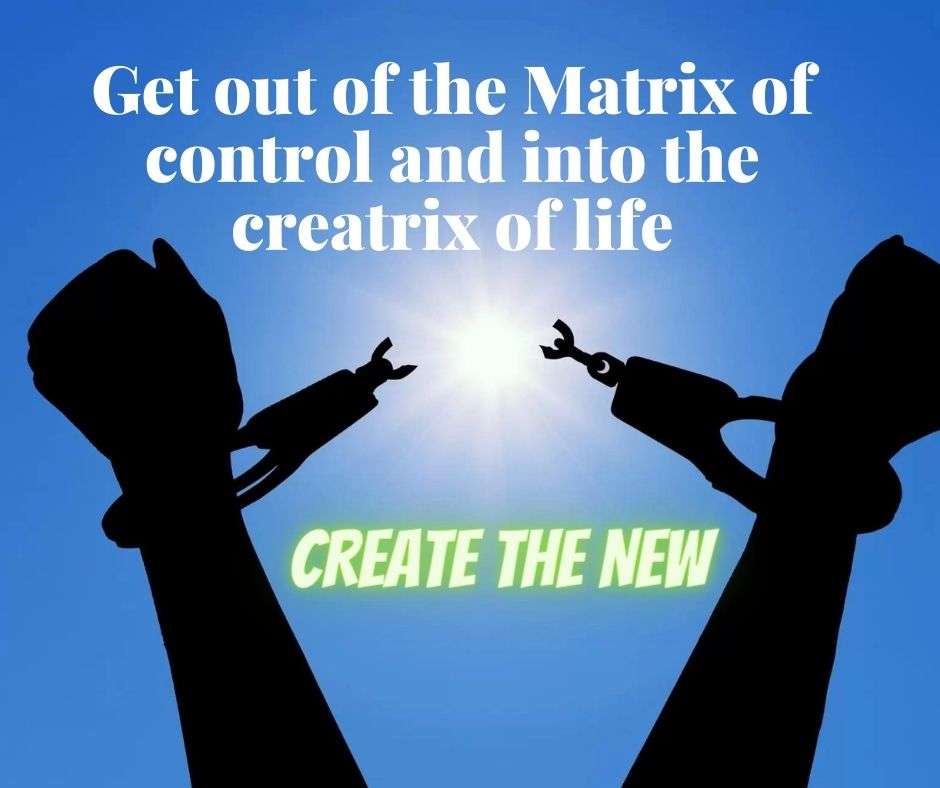 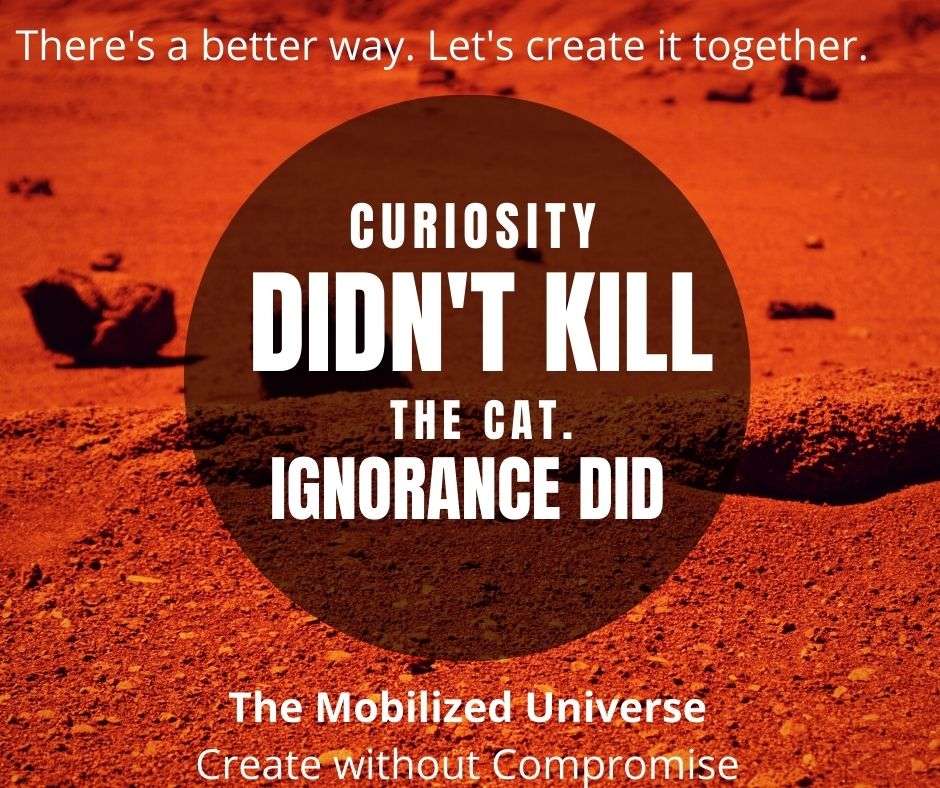 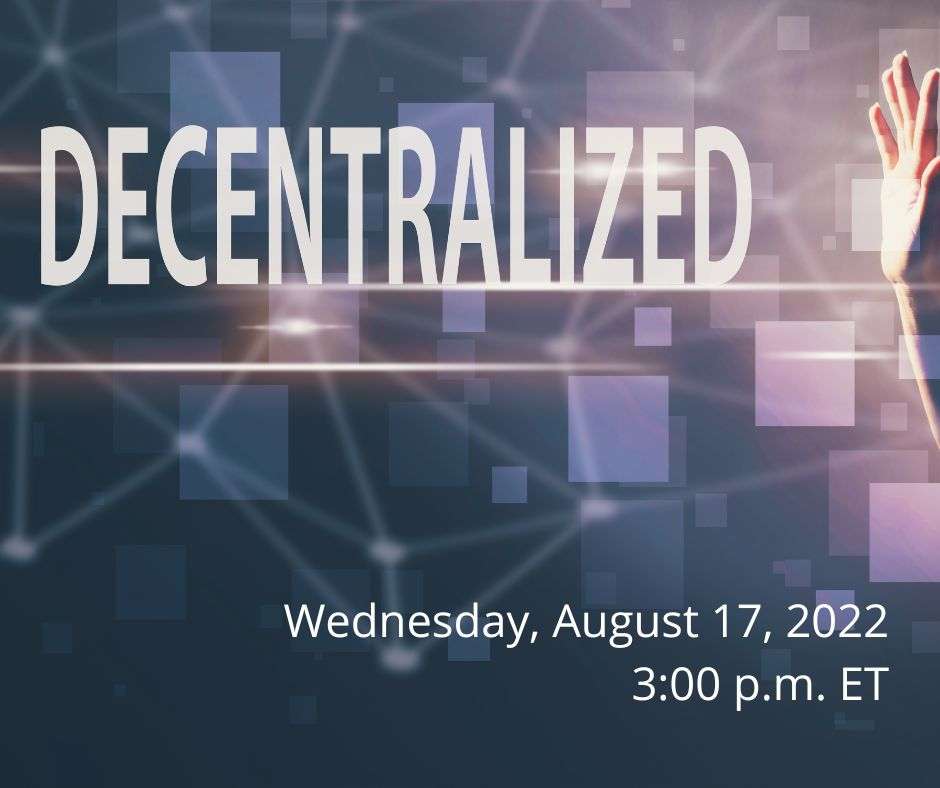 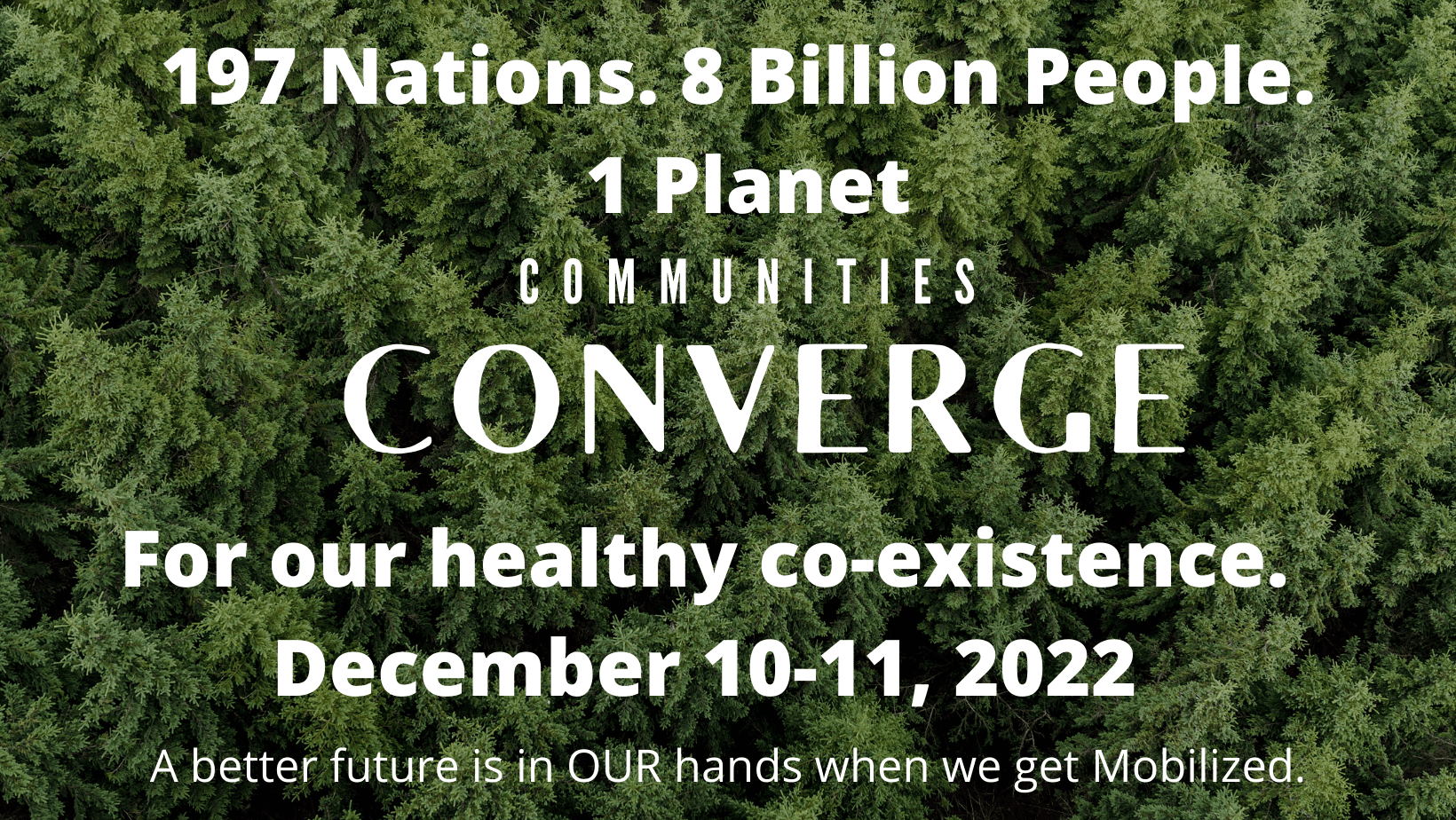