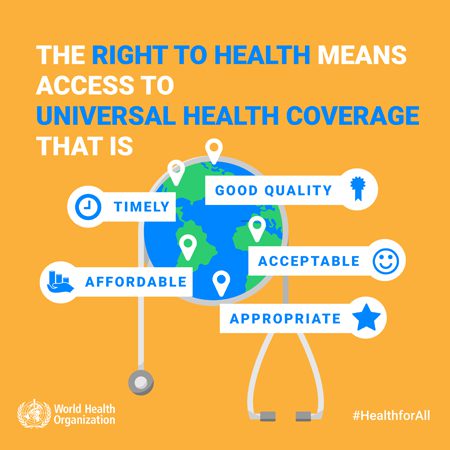 Forty years ago, the historic Alma-Ata declaration identified primary health care as central to the attainment of the goal of “Health for All” by 2020. It was a clarion call for strengthening health systems by placing primary health care at the core, reaffirming health as a fundamental human right. The declaration underscored the responsibility of governments for the health of their people while, at the same time, highlighting the need for multisectoral action and community engagement.

The declaration took a firm stance on the issue of social justice and called on countries to strengthen global solidarity to propel social and economic progress. It said: “The existing gross inequality in the health status of the people, particularly between developed and developing countries, as well as within countries is politically, socially and economically unacceptable and is, therefore, of common concern to all countries ” (1).

Since then the world has seen increased solidarity and major gains in global health, including expanded international funding for health, a mushrooming of health-related actors, and the growing ambition of regional and global health targets and goals.

The primary health care and disease elimination agendas should be considered to be mutually reinforcing and fully intertwined.

But we are still far from the targets and vision formulated by Alma Ata. At least half of the world’s population cannot access essential health services and 800 million people spend at least 10% of their household budgets on health (2). There is widespread evidence of poor quality health services in countries of all income levels (3). Progress towards the health-related Sustainable Development Goals (SDGs) is rather slow, with countries backsliding in several critical areas (4).

The revival of primary health care will be an important catalyst to achieving the ambitious health-related goals set by the SDGs.

In this context, the Global Conference on Primary Health Care , to be held in Astana, Kazakhstan on 25-26 October 2018, promises to be a milestone for both governments and the global health community. It is expected to reaffirm the principles of the original declaration and realign the primary health care movement for the context and challenges of the 21st century.

A strong political declaration on primary health care will inject much-needed momentum into health system strengthening efforts worldwide at a time of rising inequalities, geopolitical tensions and environmental risks. It is hoped that it will strengthen the case for increased investments in health and advance progress towards universal health coverage.

Developing an implementation plan to take forward the declaration – with recommendations that can be adapted to national contexts – would be equally as important. This would work best if it were aligned with the health-related SDGs, highlighting the interconnections and synergies between a primary health care orientation and those targets.

The challenge of major communicable diseases

SDG 3.3 calls for ending the epidemics of HIV, TB, malaria and neglected tropical diseases (NTDs) and to combat viral hepatitis, which together kill over 4 million people each year. Many countries’ health systems, especially in Africa and South East Asia, continue to be overwhelmed by these diseases – both due to the sheer number of individuals affected, and the difficulties in ensuring adequate prevention, diagnostics and care for all.

Despite the global attention garnered by these public health threats over the past two decades, the majority of affected countries still struggle to control the epidemics. Globally, an estimated 10 million people fell ill with TB in 2017 (5). Over 9 million people with HIV do not know that they are infected and are thus not receiving treatment (6). Over 1.5 billion people around the world require interventions to prevent or treat neglected tropical diseases.

The latest global burden estimates reveal that HIV and TB cases are not descending fast enough to achieve global milestones set for 2020, and the number of cases of HIV-associated TB remain high. Despite significant progress on many vector-borne diseases, the threat from malaria, dengue and other mosquito-borne diseases keeps rising. There is a strong global political commitment to end the epidemics by 2030 but the road ahead is still long and the climb will be hard.

While high-impact communicable diseases pose the biggest challenge in the world’s poorest countries, they are also prevalent in many middle- and high-income countries. Ending the epidemics requires swift action to strengthen the foundation of health systems and to break down the legal, financial and cultural barriers to access. It also requires reaching beyond the health sector to address the risk factors and determinants of these diseases.

Strengthening primary health care will enable a much-needed integration of health services (including health promotion, disease prevention, diagnosis, treatment and chronic care) and an expansion of access to core communicable disease interventions along the full continuum of care.

Strengthening primary health care, by default, also means addressing global health worker shortages – a long-standing and particularly urgent challenge. In countries where community health worker programmes form a critical extension of the health system, primary health strengthening efforts can and should include an expansion of these programmes, too. In countries where most of the disease burden is in rural, hard-to-reach settings, community health workers must be trained to be able to diagnose, treat or refer multiple diseases.

The primary health care and disease elimination agendas should be therefore considered to be mutually reinforcing and fully intertwined.

The transition toward more integrated systems is already visible.

Maternal and child health clinics have long been used to distribute insecticide-treated bed nets and preventive therapies to protect against malaria and selected NTDs. Many countries are rolling out ‘triple elimination’ programmes for mother-to-child transmission of HIV, hepatitis B and syphilis using the maternal and child health platform. In recent years, countries with a high double burden of HIV and TB (e.g. India and many countries in sub-Saharan Africa) have achieved greater integration of HIV and TB services, particularly in terms of planning and programming. Most NTD programmes today are not disease- but intervention-based programmes, delivered at the community level.

With regard to global funding flows, the Global Fund has promoted integration of TB and HIV services through single funding requests and joint programming since 2014. Today, as much as 27% of the Fund’s investments (7) are dedicated to service delivery integration and other systemic challenges such as data quality and data usage, human resources for health, procurement and supply chain management, and improving health sector governance.

A broader benefit that will emerge from a renewal of primary health care is that it will help to ensure long-term sustainability for disease elimination efforts. At the same time, continued investments in high-impact communicable diseases will make populations healthier and free up resources for other critical health challenges.

Scaling up investments in both primary health care and in the elimination of high-impact communicable diseases will be a strong demonstration of governmental commitment to invest in people’s health and take concrete steps towards universal health coverage.

In Astana, country representatives will have an opportunity to advance social justice and global solidarity, following in the footsteps of officials who came before them 40 years ago. They should seize this historic opportunity.

(4) See for instance: WHO. World Health Statistics 2018. Monitoring Health for the SDGs, May 2018, or WHO and partners. The State of Food Security and Nutrition in the World 2018, September 2018

Countries are spending more on health, but people are still paying too much out of their own pockets

Ten things to know about the health of refugees and migrants