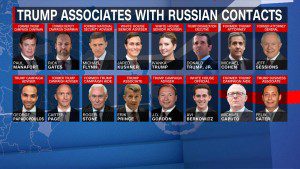 After three years the Republican chaired Senate Intelligence Committee led by Marco Rubio investigating Russian meddling in our 2016 election, finally issued its one-thousand page report, a fifth and final volume with new details regarding Russian links to the Trump campaign. The report revealed bipartisan agreement on the facts in question but acknowledged that Democrats and Republicans could not agree whether that constituted collusion between the Trump team and Russia.

It further confirms that members of the Trump campaign cooperated with Russian efforts to get Trump elected.  Specifically highlighted was that Paul Manafort, working as chairman of the Trump campaign was secretly communicating with a Russian intelligence officer with whom he discussed campaign strategy using ten different encrypting applications, repeatedly sharing internal campaign polling data.

Although the Mueller report, did not find sufficient  evidence of criminal conspiracy, it admits that Russian interference did exist and  left unanswered the question of what constituted cooperation or collusion. While the current Senate report shares those sentiments, it did reveal in greater depth the direct connection between Trump’s campaign and Russian intelligence.  Konstantin Kilimnik, who enjoyed a longtime, very close relationship with Paul Manafort, was a indeed a Russian intelligence officer. During the campaign, Mr. Manafort directed Kilimnik to convey messages to Russian oligarchs regarding significant political intelligence that included internal polling data, allowing the  Russians to understand Trump campaign strategy, namely where it focused resources and who it was trying to influence, valuable information for a foreign adversary seeking to influence the election.

The report states, “On numerous occasions over the course of his time of the Trump Campaign, Manafort sought to secretly share internal campaign information with Kilimnik. … Manafort briefed Kilimnik on sensitive campaign polling data and the campaign’s strategy for beating Hillary Clinton.”

Whether conspiracy, collusion or the innocent confluence of coincidental events, no one should be comfortable with this approach to campaign management, as Mr. Manafort was so mandated.  It’s time we, the American electorate,  grew up, no longer accept and stop responding to political campaigns as a series of dirty tricks, smear tactics and false assertions of wrongdoing especially when we have sufficient evidence of wrong doing laid at our feet.

Get Mobilized and Make Love Go Viral!
Related Topics:RussiaTrump. Manafort
Up Next