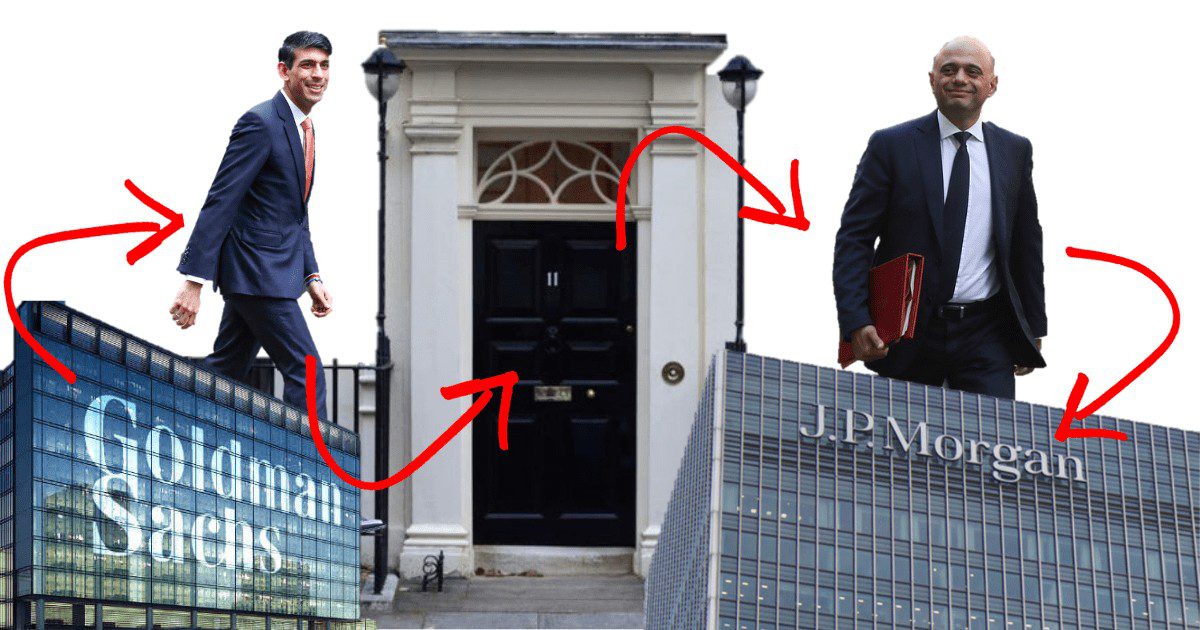 Former Chancellor Sajid Javid’s new job at JP Morgan, marks yet another swing in the revolving door between our biggest financial and political institutions – one that desperately needs slamming shut.

It was announced this week that Sajid Javid will join the US banking giant JP Morgan as a senior advisor. The move will be a return to banking for the one-time Chancellor of the Exchequer, who previously worked for JP Morgan in the 1990s. Javid’s career in banking lasted 18 years and ended with his rise to board member of Deutsche Bank International, before he entered politics in 2010.

A near-perfect example of a revolving door, Javid’s new role highlights the danger of those who are tasked with legislating our financial sector being pulled into working for the opposite side. But he is sadly just the latest in a long line of politicians who have made the jump between Westminster and the City.

JP Morgan hired former Labour Prime Minister Tony Blair as a global advisor after leaving office in 2008, ex-PM Gordon Brown is an advisory board member of the investment firm PIMCO and three ex-Chancellors have also made the jump. George Osborne took up a £650,000-a-year advisory post at the investment bank BlackRock, Philip Hammond is currently a partner of the energy investment outfit Buckthorn Partners and Alistair Darling sits on Morgan Stanley’s board of directors. Javid’s move also mirrors the journey of our current Chancellor Rishi Sunak, who worked for the investment bank Goldman Sachs before taking up his parliamentary seat in 2015. Sadly this handful of past residents from Numbers 10 and 11 Downing Street only scratch the surface, countless other examples can be found across the civil service, the Cabinet and the House of Lords.

But what makes today’s announcement even more concerning, is that Javid secured this role while still serving as Member of Parliament for Bromsgrove. While the role was approved by the advisory committee on business appointments (ACOBA), a Cabinet committee tasked with overseeing jobs taken up by former ministers and senior civil servants, the committee itself warned that the ex-chancellor’s “privileged access to information” meant accepting a job with JP Morgan carried “potential risks”. While they also advised Javid not to take up the job until six months after his last day in government, ACOBA’s lack of enforcement power infamously led to them being branded as a “toothless regulator” by a group of MPs back in 2017, after Osborne’s aforementioned jump to BlackRock. While representing your constituency strikes us as a pretty much full-time position, MPs are currently allowed second jobs. However, we cannot hope to radically reform our money and banking system while the big banks continue to entice politicians into their employ.

Beyond parliament, the revolving door between UK banking sector regulation and finance also reaches the Bank of England. A third of members of the monetary policy committee (the Bank’s most powerful decision-making body) previously worked in commercial banking and just last month Hanneke Smits resigned from the Bank’s Court of Directors to become CEO of BNY Mellon Investment Management.

As long as banks are guided solely by the need to churn out ever greater profits at the expense of our collective and environmental wellbeing – and their past and future employees keep passing through our corridors of power – we’ll never get the sweeping changes we need to fix the societal and ecological challenges we currently face. It’s time to close the door and break the link between politics and the financial sector for good.

Peaceful Protest vs. “Law and Order!”