Can Self-Compassion Improve Well-Being in Teens?

Teenagers today face many challenges, often including intense expectations and pressures from their parents, teachers, and friends. Sometimes, however, their harshest critics are not any of these other people, but themselves. Could self-compassion help? 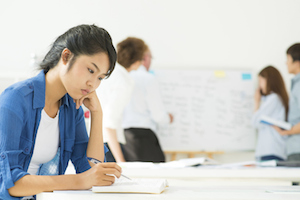 Pioneering researcher Kristin Neff defines self-compassion as treating oneself with kindness and care rather than judgment, being mindful of one’s own painful feelings, and understanding one’s suffering as part of the common human condition. While many studies have found it to be associated with well-being in adults, few researchers have investigated if this is true for young people as well. Now two new studies suggest that self-critical teenagers can also benefit from a dose of self-compassion—and this might be especially true for high-school girls.

In the first study, published this year in The Journal of Positive Psychology, Karen Bluth and Priscilla Blanton surveyed students in middle and high school about their levels of positive and negative feeling, perceived stress, and life satisfaction—as well as self-compassion. Overall, they found that self-compassion was associated with higher life satisfaction and lower perceived stress and negative feeling.

Compared to both their male counterparts and to the middle school girls, the high school girls felt significantly worse and more stressed out. They were also less satisfied with their lives and much less self-compassionate.  According to researchers, the high school girls “reported being more self-judging, feeling more isolated, and having more difficulty maintaining a balanced perspective in the midst of challenging circumstances.” This finding concurs with other research that has found higher depression rates in adolescent females compared to males as well as lower self-compassion among adult women compared to men.

Although this study couldn’t determine the causal direction of any of these relationships, the authors suggest that a program to build and develop self-compassion in younger adolescents, especially girls, could help prevent the apparent self-compassion decline. Such programs have shown promising results in adults, and could help enhance the emotional well-being of teens as they navigate the challenges of adolescence.

The second study, conducted by Sarah Marshall and colleagues, tried to address the issue of causality by seeing how both self-compassion and self-esteem might relate to well-being over time. Low self-esteem has long been associated with reduced mental health in young people, and so well-meaning adults have tried to increase it. Unfortunately, self-esteem involves comparisons to others, and recent research has found that too much can lead to narcissism and avoidance of growth opportunities.

This result makes sense since self-compassion, unlike self-esteem, would allow the students to accept their shortcomings with kindness, rather than judging themselves or avoiding their flaws. High self-esteem can be great, but teenagers—like all of us—often encounter situations that cause them to doubt themselves. In the face of these struggles, the authors propose, self-compassion could be a key to teens’ maintaining a healthy, balanced view of themselves and their lives.

Although more research is needed, it’s clear that self-compassion shows a lot of promise as a way to help teenagers become happier and healthier. Through all the challenges they face, they may not come out on top every time—and that’s OK.

Emily Campbell is the research assistant for the Greater Good Science Center’s education program and a Ph.D. student in education at UC Berkeley

Learning from the Natural World: BYO Earth in Guatemala and the wonderful Worms