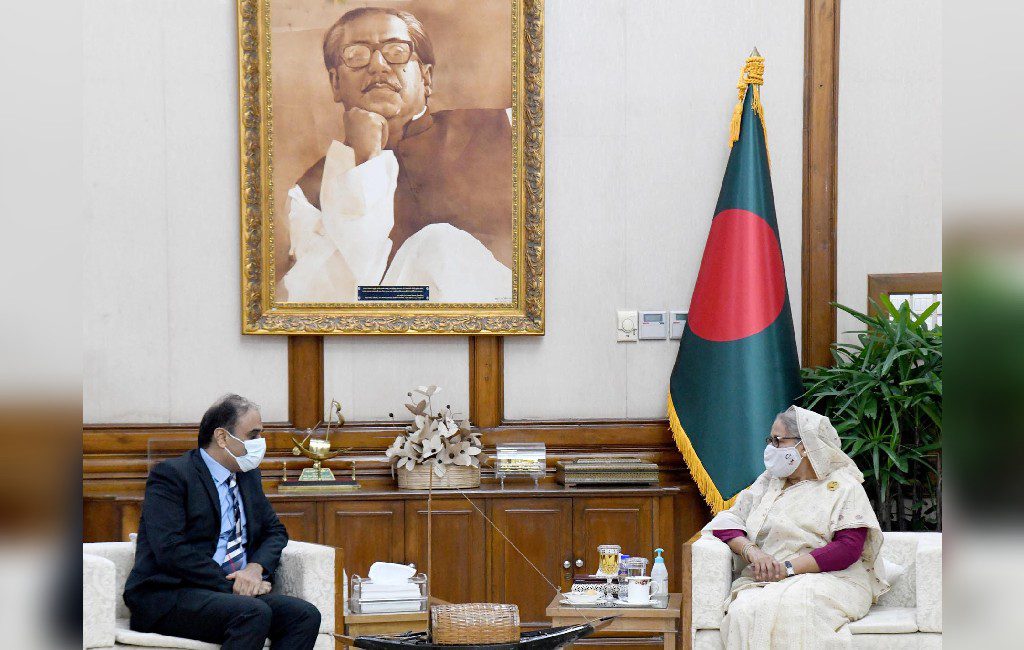 Pakistan High Commissioner to Bangladesh Imran Ahmed Siddiqui’s recent meeting with Bangladesh Prime Minister Sheikh Hasina was comprehensively covered in the media. It only shows the strategic significance of the meeting. The meeting has messages for the region, including some ominous signs for India, as it has the potential to change the entire regional geopolitical game.

Bangladesh is indeed a trusted friend of India in the South Asian region. Bangladesh-India relations can be described as “all-weather friendship”, just like the ties between Pakistan and China.

According to a report in the leading Pakistani media outlet Dawn, Sheikh Hasina invited Pakistan Prime Minister Imran Khan to visit Bangladesh. Pakistani media outlets reported that Sheikh Hasina also expressed her interest in visiting Pakistan. This could be a significant development in terms of regional geopolitics, provided the news is correct.

Recent incidents in Bangladesh surrounding the violent acts during the Hindu festival of Durga Puja have indeed created some distance between New Delhi and Dhaka. This followed issues like India’s National Register of Citizens and the Citizenship Amendment Act, which had already caused tension between Bangladesh and India. Delay in the resolution of long-pending issues like the signing of the Teesta water-sharing deal despite Dhaka’s persistent demands, killing of civilians across the Bangladesh border, as also the onion crisis have sowed some distrust between the two longtime friends.

Sheikh Hasina’s counter to India’s angry diplomatic note on the recent killings of Bangladesh’s Hindus and vandalisation of their property and socio-cultural symbol has not been particularly palatable to New Delhi. Bangladesh Prime Minister Sheikh Hasina reacted that neighbouring countries like India should also be vigilant to ensure that religion is not used to divide people, against the backdrop of communal clashes in several parts of her country during Durga Puja.

In view of the rising incidents of hate crimes against the Muslims in India and the Narendra Modi government’s biased policies towards minorities, Bangladesh Prime Minister Sheikh Hasina warned New Delhi that these incidents could affect the Hindu community in her country.

However, Bangladesh is going to emerge as a self-sufficient economic power in the region. As such, India needs to behave in a more friendly manner.

During his meeting with Sheikh Hasina at the Prime Minister’s official residence Ganobhaban, the newly appointed Pakistan High Commissioner handed over to her a message from Imran Khan. The Bangladeshi prime minister has recently conveyed in writing to Pakistan her acceptance of Prime Minister Imran Khan’s invitation, which was extended last July. No dates have been set as yet for the trip. PM Ms Hasina has also invited PM Mr Khan to visit Bangladesh. The Pakistani side has proposed to Bangladesh to prepare a road map for the prime minister’s trip so that it is fruitful. Moreover, Islamabad is seeking the revival of bilateral mechanisms like the foreign secretaries’ dialogue, which has not been held for nearly 13 years.

After the meeting, the Bangladesh premier’s Press Secretary Ihsanul Karim, in his briefing to reporters, said Sheikh Hasina told the envoy that South Asian countries should be freed from the curse of hunger and illiteracy and needed to work for the welfare of the people of the region. The Prime Minister further said that the foreign policy of Bangladesh formulated by Father of the Nation Bangabandhu Sheikh Mujibur Rahman is “friendship with all, not enmity with anyone”.

During the meeting, High Commissioner Imran Ahmed Siddiqui said Pakistan is interested in developing its relations with Bangladesh. He also gifted a photo album, painting, and video footage of Sheikh Mujibur Rahman’s visit to Pakistan as the Prime Minister of Bangladesh to attend the 1974 OIC (Organization of Islamic Cooperation) Summit. Hasina thanked the High Commissioner for handing over the historical memorabilia. She also commended the publication of a calligraphy book in Bengali by Pakistan on the occasion of the golden jubilee of Bangladesh’s independence

Ambassador at Large Mohammad Ziauddin and the Prime Minister’s Principal Secretary Ahmed Kaikaus were present during the interaction. While the detailed deliberations of the meeting were not made public, multiple issues are likely to have cropped up at the discussion table.

This should ring the alarm bell for India. China and Pakistan are always scouring for opportunities by utilizing any kind of strain in Bangladesh-India ties, and would obviously try to exploit the present regional political scenario.

In this context, one assumes that India would strive to keep its warm relations with Bangladesh at its level best. India should keep its promises made earlier to Bangladesh. India shouldn’t point an accusing finger at Bangladesh for the recent incidents.

Indian politicians should do well to stay away from making remarks or come up with statements that may disturb the Bangladesh-India friendly ties. Such comments can only create a gulf between Bangladesh and India, which is undesirable. It is well established that the Bangladesh government is going all out to take concrete actions against culprits who were involved in recent communal violence in Bangladesh. India and the world know that Bangladesh is a secular country.

PM Hasina is a person of liberal views with a secular outlook. India should stop spreading baseless propaganda against Bangladesh. Indian media agencies and religious organizations should desist from circulating any events and issues which can potentially cause damage to the bilateral relations between Bangladesh and India.

New Delhi should take effective steps to stop border killings across the Bangladesh-India border. The long-pending Teesta issue must be resolved. Interference in the internal affairs of Bangladesh by some Indian political leaders must be stopped.

India should behave as an ‘all-weather ally” just as China does towards Pakistan. Otherwise, India might lose its most trustworthy and reliable friend in the world. India and Bangladesh had, have, and will have – hopefully – eternal strategic ties. Bangladesh needs India and vice versa. Indian leaders should take serious note of the recent meeting of the Pakistan envoy with the Bangladesh PM. A single negative incident between India and Bangladesh has the potential of changing the regional geopolitical scenario.

The article first appeared in South Asia Monitor on October 28, 2021.