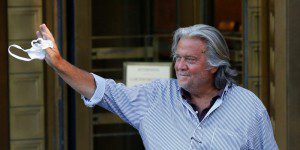 If you can look at the mountain of first-hand criticism of Donald Trump, either as a pitiful, degenerate human being or as an incompetent, unqualified  president, and still resist questioning the alignment of your  your own political beliefs with his personal agenda, then you are beyond hope.

Yesterday, yet another indictment was added to the A-list of Trump insiders, his strategists and confidants closest to him steering the bulldozer, Steve Bannon. Paul Manafort, Michael Cohen, Michael Flynn, Roger Stone, Rick Gates and George Papadopoulos, all convicted.  But for the possibility of legal shenanigans, Steve Bannon will soon follow.  The evidence is irrefutable. Let’s hope it’s after Trump leaves office, when he can no longer pardon him.  I don’t think pardoning power was ever granted to Presidents so that those whose crimes were committed on behalf of a President would be protected. And by the way, it’s no small matter that Trump has an Attorney General willing to bend to his will.

Another list in the mountain of events confirming his lack of qualification is the never-ending flight of significant personal appointments either by resignation or by firing.  Since he took office, anyone and everyone whose opinion he has disregarded, such as Cabinet positions, Press Secretaries and Chiefs of Staff,  has abandoned their post. The list is far too long for me to enumerate here without spending hours of research to exactingly find each and every name, but if you followed the news the last three and a half years, you know who they are. These were for the most part professional, qualified people.  You might disagree with their politics, but they were far more qualified than the yes-men that replaced them.  Now, with some distance, many are telling their stories.  None…Let me say it again, NONE are flattering.  Do you think you know the truth by discounting their version of events as the accounts of “disgruntled employees?”  All of them?  The ratio is something like 35 to 1, critical voices vs. narcissistic self-aggrandizement.  I would grant that a rock or a turnip has more the ability to reason than those who refuse to confront these insider accounts objectively.

And so, perhaps in frustration, but more with a patriotic sensibility and a certain sense of guilt as an enabler, many of these insiders have followed the path of an altruistic mea-culpa and have written accounts of their brief stay in the shadow of this “stable genius” who finds it necessary to brag about “acing” the Montreal Cognitive Assessment Test administered by the doctors at Walter Reed Medical Center, one in which he identified a camel, a lion and a rhinoceros, copied a cube and drew a clock to read ten past eleven. Let’s have a Presidential fanfare.  Hail to the Chief.

Many of these excommunicated felt obligated to write a book about their experience as a Trump insider with a privileged ringside view.  I suppose it was a form of catharsis, or perhaps an act of contrition.  Even in anger or revenge, it doesn’t make them any less truthful.  Oh, I know you’re going to tell me it was all about the money, but just consider for a moment that the 30-second sound bites proffered by TV news media cannot adequately represent a complicated and detailed version of history, and in an ever-churning news cycle compelled to cover each Trump insult and Tweet, are soon forgotten.

Notable books on the “must read list” of insiders are:

Mary Trump, “Too Much and Never Enough”

John Bolton, “The Room Where it Happened”

And to while away the hours there are a great many more books, approximately 124 in all, questioning Donald Trump’s presidency. Many by respected people who are in the know, like Bob Woodward (“Fear” and “Rage”) or Trump Biographer, Michael Wolf (“Fire & Fury” and “Seige”).

For historical perspective try reading John Dean’s tome, “Authoritarian Nightmare,”  but for the sheer pleasure of boisterous belly laughs interspersed with an awareness of your own feelings of depressed hopelessness, read my favorite author, Matt Taibbi’s “Insane Clown President.”

Ah, but I digress.  All this is just setting the stage for the latest round of revelations by Miles Taylor, long-time Republican and former Chief of Staff to Homeland Security Secretary Kiersten Nielsen, who accuses Trump of abusing his office for political purposes. And Taylor should know of which he speaks, for in his capacity as Chief of staff to the Homeland Security Secretary, was present at most if not all national security meetings involving DHS with Trump et all.

Miles comments detail a familiar story and lend credence to the accounts of others before him.

“What we saw week in and week out, for me, after two and a half years in that administration, was terrifying. We would go in to try to talk to him about a pressing national security issue — cyberattack, terrorism threat — he wasn’t interested in those things. To him, they weren’t priorities.”

“He told us to stop giving money to people whose houses had burned down from a wildfire because he was so rageful that people in the state of California didn’t support him and that politically it wasn’t a base for him.”

Consequently he directed FEMA to withhold disaster relief funding to Californians following devastating wildfires there because voters had not voted for him for President.

He wanted to reapply the “zero-tolerance” immigration policy that separated migrant children from their families in a more draconian fashion in order to deter illegal immigration.

“He said he wanted to go further and have a deliberate policy of ripping children away from their parents to show those parents that they shouldn’t come to the border in the first place,”

And when officials pushed back on Trump’s illegal demands as unfeasible, Trump responded by citing “magical authorities” he claimed to have as President.

“He was one of the most unfocused and undisciplined senior executives I have ever encountered…. based on firsthand experience the President was ill-equipped and wouldn’t become equipped to do his job effectively — and what’s worse, was actively doing damage to our national security.”

He insisted on a near-total focus on issues that he said were central to his reelection — in particular building a wall on the U.S. border with Mexico. During a March 28, 2019 meeting, Trump moved to close a section of the US-Mexico border. He told officials that he opted for a section of the California-Mexico border — rather than Texas or Arizona — “because it would be better for him politically.”

He also advocated “dumping” illegal immigrants in Democratic-leaning sanctuary cities and states to overload the authorities there.

“I wasn’t in a position to judge how his personal deficiencies affected other important matters, such as the environment or energy policy, but when it came to national security, I witnessed the damning results firsthand.”

Trump wanted to sell Puerto Rico to fund buying Greenland because “Puerto Rico was dirty and the people were poor.” He hatched this idea just before traveling to Puerto Rico following Hurricane Maria’s devastion of the population leaving many without shelter, water, electricity and food.

Taylor’s account confirms previous media coverage that Trump directed his lawyer to look into purchasing the autonomous territory. ”If he is truly contemplating this, then this is final proof that he has gone mad,” a spokesman for the Danish People’s Party said, after which in a huff Trump abruptly cancelled his trip to Denmark claiming it was merely rescheduled.

“Top DHS officials were regularly diverted from dealing with genuine security threats by the chore of responding to these inappropriate and often absurd executive requests, at all hours of the day and night. One morning it might be a demand to shut off congressionally appropriated funds to a foreign ally that had angered him, and that evening it might be a request to sharpen the spikes atop the border wall so they’d be more damaging to human flesh (“How much would that cost us?”).  Meanwhile, Trump showed vanishingly little interest in subjects of vital national security interest, including cybersecurity, domestic terrorism and malicious foreign interference in U.S. affairs.”

Taylor goes on, “The president has similarly undermined U.S. security abroad. His own former national security adviser John Bolton made the case so convincingly with his recent book and public accounts that there is little to add, other than to say that Bolton got it right. Because the commander in chief has diminished America’s influence overseas, today the nation has fewer friends and stronger enemies than when Trump took office.”

Putting partisan politics aside, Taylor is now actively engaged in supporting Joe Biden and Kamala Harris.  It’s one more testament to the premise that this election is less about policy than it is about the man making the decisions.  Do we carry on with the principles of our constitution or do we wander down the dark road to an authoritarian fascist regime.