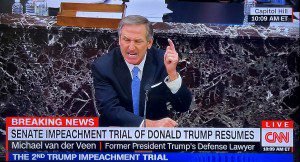 At the close of day three of impeachment arguments, each side felt secure that they had adequately presented their case and were poised to conduct the vote the following day.  But something unexpected intervened in the process that evening when CNN Reporter Jamie Gangel revealed that Congressperson Jaimie Buetler Herrara had told her that in the heat of the assault on the Capitol, Minority Leader Kevin McCarthy pleaded with Trump “to publicly and forcefully call off the riot.”

Trump countered that Antifa, not his supporters, was responsible, presumably to argue that he was helpless to control Antifa, but when McCarthy countered that was not true Trump turned snarky, “Well, Kevin, I guess these people are more upset about the election than you are,” to which McCarthy angrily responded, “Just who the fuck do you think you’re talking to?”

Herrara went on to say, “You have to look at what he did during the insurrection to confirm where his mind was at.  That line right there demonstrates to me that either he didn’t care, which is impeachable because you cannot allow an attack on your soil, or he wanted it to happen and was OK with it, which makes me so angry… we should never stand for that, for any reason under any party flag.  I’m trying really hard not to say the F-word.”

The significance of this revelation is that it confirms Trump’s knowledge at the time and his refusal to take action to stop the violence.

Other Republicans echoed her sentiments.

Representative Anthony Gonzalez, Ohio: “I think it speaks to the former President’s mindset. He was not sorry to see his unyieldingly loyal Vice President or the Congress under the attack by the mob he inspired, in fact, it seems he was happy about it or at the least enjoyed the scenes that were horrifying to most Americans across the country.”

Another GOP Member familiar with the call: “This proves that the President knew—very early on—what the mob was doing and he knew members were at risk and refused to act… It’s a violation of his oath to office to fail to come to the defense of Congress and the constitutional process immediately… This shows that Trump knew what the rioters were doing, that he supported it and that he facilitated it by failing to act.”

Just as Republicans were comfortable that the vote would be taken the very next day and their painful ordeal would mercifully be at an end so they could go home, this bit of late-breaking news added an unwanted layer to the arguments previously made by the impeachment managers and as they watched helplessly, Jamie Raskin motioned to include the testimony of witnesses.

What followed was the most outstanding moment in the impeachment proceedings when Trump’s lead lawyer, the indignant Michael van der Veen, took the floor to rail passionately against the motion in what would have otherwise been an Academy Award performance, were it not for the setting. Gesticulating wildly, with a spectacular variety of wrinkled grimaces, he displayed his virtuoso range as an actor and lied by saying that Kevin McCarthy did not have that conversation with Trump, (By the way it’s OK for lawyers to lie.  They are not, as witnesses are, subject to perjury) and then paper tiger that he is, threw a raging conniption fit, claiming he would call hundreds of witnesses in response taking their depositions at his office in Philadelphia to include Nancy Pelosi and Vice President Harris.  He stopped himself short of using her first name since he seems to be unable to pronounce it, as evidenced the day before. He was nevertheless laughed at and took immediate umbrage.

Unfortunately for the personal injuries attorney from Phillie, unfamiliar with Senatorial rules, he did not understand that each and every witness would have to be confirmed by a separate vote, which meant that his childish threat to exacerbate the process was going nowhere.

Moving on, he further tried to make the argument that her testimony would be irrelevant since it regarded a conversation between her and McCarthy made after the January 6th riot and therefore could not have been part of the incitement.  He failed to acknowledge that it was really about what Trump knew and did not do at the time of the riot that confirmed his intentions that day.

While all this will surely fall on the deaf ears of Republican jurists, it is to their everlasting doom to be this short-sighted, if this simple survey taken by Michael Smerconish carries any weight.  Simply stated, “Was Trump glad or sad that the Capitol was invaded?”  An astounding 37,497 Americans responded in mere minutes, affirming by 99% that they believed Trump to be glad. Americans were watching and listening and comprehending. 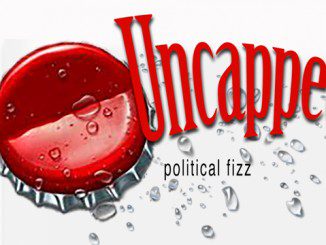 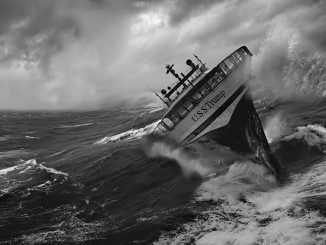