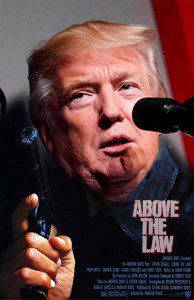 Some of you may remember strongman Steven Segal’s movie of the same name, but today as we close the chapter on the Trumpian era, this phrase has new and added meaning, as Trump continues his campaign to pardon his co-conspirators, family and friends.

While our founders recognized that all men are created equal, it is nevertheless the responsibility of our evolving institutions to maintain that equality through the application of ethical legal standards based on our constitution.  We summarize this philosophical standard by simply saying “no man is above the law.”  But is that really true?

If a law does not accurately reflect the principles in the constitution and has been written in such a way as to provide loopholes that allow for inequality, then the answer is yes, the action is legal, perhaps not yet constitutionally tested.  If the President of the United States is free to use the pardoning power of his office to allow convicted criminal co-conspirators of his administration to go free of their crimes, then that action, while legal, is constitutionally abhorrent.  To further extend pardons to family and friends is to create a special class of citizens who are above the law.  But the supreme transgression is a radical idea that a President may pardon him or herself and anyone else, especially family and friends,  from future criminal prosecution of past deeds, as yet to be determined.  It is a “get out of jail free card” that encourages and permits the violation of all legal standards without consequence and therefore negates all restrictions and safeguards placed on the administration of that office and those who support it, that was meant to protect its citizens from malfeasance in office.

It is further a violation of democratic philosophical principles to expect that a President who has committed egregious criminal activity, whether in or out of office, should not have to suffer prosecution and serve prison time simply because it is below the dignity of the office itself.  We must come to realize that the man is not the office and the office is not the man. If we cannot accept this, and ultimately if we cannot correct this, then this existing and quite legal inequality will prevail to sow dissention and division among citizens, especially those who suffer strict and tragic consequences and even face death while driving to work with a broken taillight, or just walking down the street in a black hoodie.

There must be a reckoning.  We must decide on which battlefield it will take place, if not in Congress and the courts then it will most certainly be in the streets.